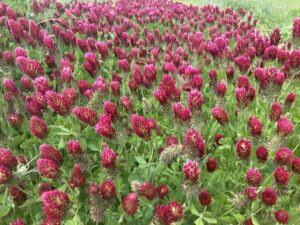 Our 2022 cover crop variety trial results are in! If you are thinking about putting in a cover crop this fall, check out which varieties and mixes did best. Entries were evaluated in both an early and late planted trial (early Oct., early Nov.) and under two termination timings (early Apr., early May). In addition to information on biomass, our report has data on which cover crops provided the best canopy cover throughout the season, estimated nitrogen release to the succeeding cash crop, and forage characteristics for those interested in grazing their covers. 21-22 TN Cover Crop Variety Test Report 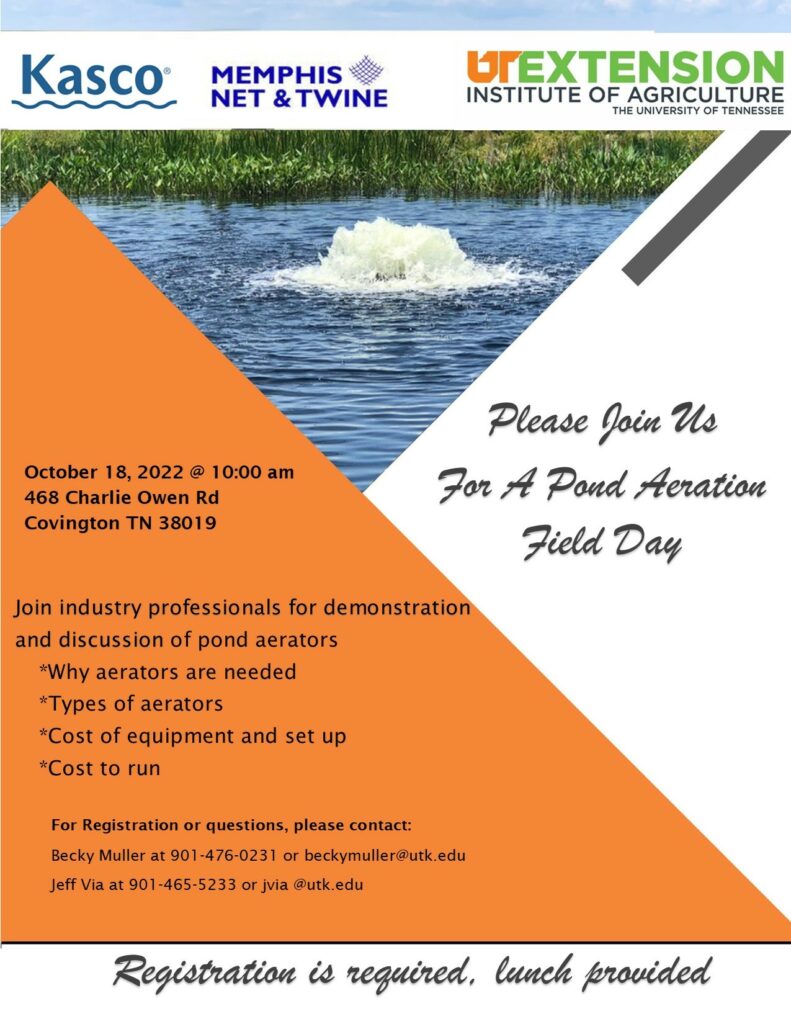 On October 18th at 10:00 am there will be a pond meeting on aeration.  Fisheries Biologist Bob Robinson from Kasco aerators will be discussing everything about aerators.  He will even have a couple of types there to see.  The meeting will be at:

There is a covered pavilion with picnic tables and chairs as well as a restroom.  Memphis Net and Twine and Kasco are sponsoring our lunch so I will need a head count.  Please call the office at 901-476-0231 or email me at beckymuller@utk.edu or Jeff Via at 901-476-0231 or jvia@utk.edu if you plan to attend.

The West Tennessee Research and Education Center (WTREC) would like to cordially invite you to the 2022 University of Tennessee Cotton Tour.  This event is scheduled for Wednesday, Sept. 21st at WTREC (605 Airways Blvd., Jackson, TN 38301).  Registration will begin at 8:00 a.m. with the tour departing at 8:15.  The tour will end at noon with lunch. University of Tennessee Extension and Research personnel from across the state will be presenting on a wide range of pertinent topics. Pesticide Re-certification and CCA points will be available. The agenda can be found by clicking here.  Looking forward to seeing you there!

Soybeans were up; corn, cotton, and wheat down for the week.

Should producers start managing price risk for the 2023 crop? Yes. On September 16, December 2023 corn futures were $6.20/bu and November 2023 soybean futures were $13.66/bu. Some producers will be looking to hedge new crop production (and this would be a prudent risk management decision for many), however given volatility and the potential for increased margin requirements a more cost-effective strategy may be bridging the price risk gap until crop insurance prices are determined in March. Continue reading at Tennessee Market Highlights. 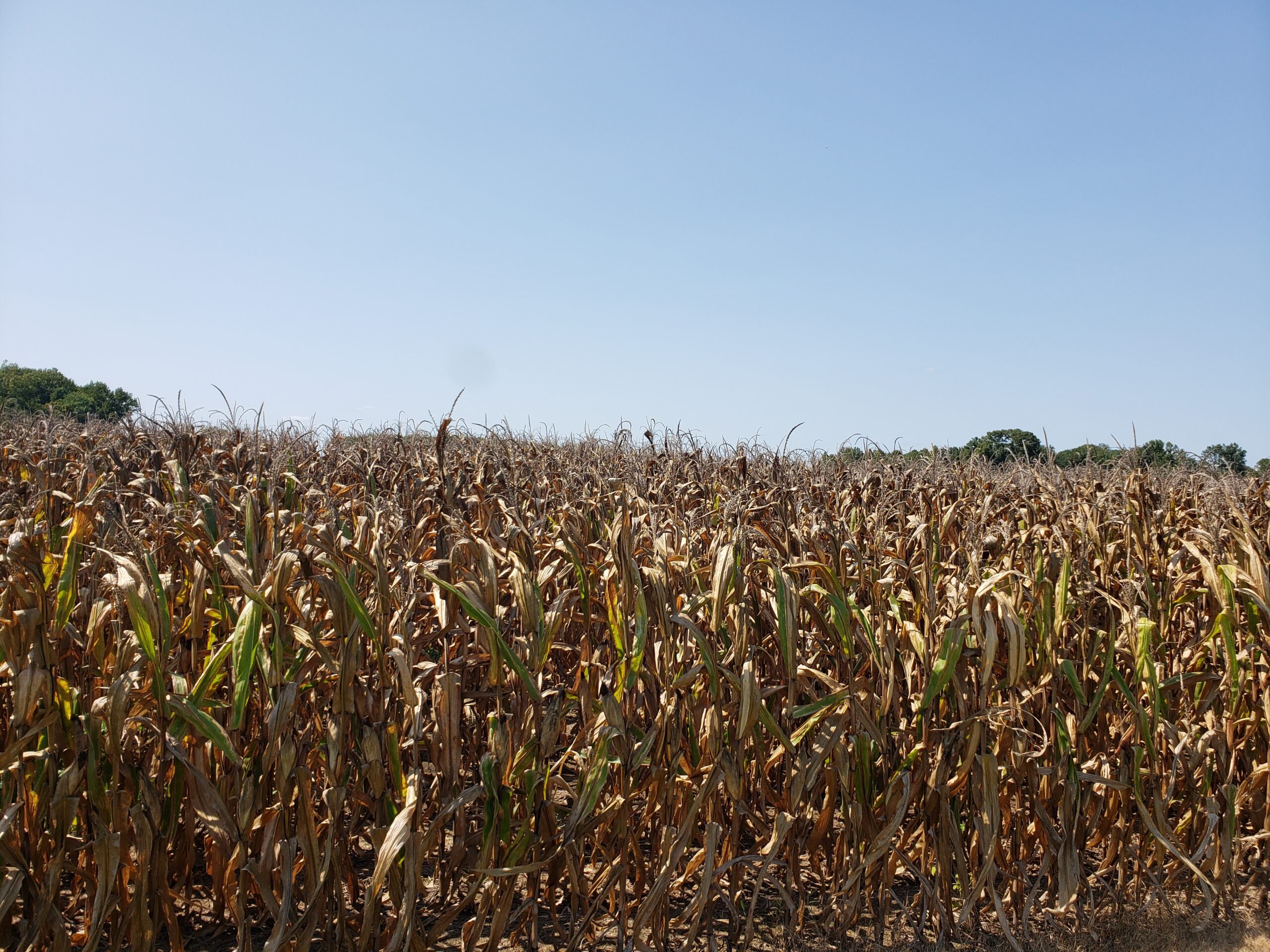 Abnormally dry soil conditions as a result of rainfall amounts far below average during this corn growing season present unique nutrient management decisions after harvest, particularly for growers considering wheat crop this fall. This article will address two key questions that may come handy in making management decisions: Is there be considerable amounts of residual soil N left after the 2022 corn crop? and if the residual soil nitrate is sufficient to meet N demand of the wheat crop in the fall? END_OF_DOCUMENT_TOKEN_TO_BE_REPLACED

Corn, cotton, and wheat were up; soybeans were down for the week.

December corn increased from $5.61 ¾, on July 22, to $6.85 this Friday, a 123 ½ cent increase in seven months. The upward trend has been supported by production concerns in the U.S. The August USDA WASDE report estimated national yield at 175.4 bu/acre, however many analysts are expecting a revision in yield next Monday to around 173 bu/acre. A 2.4 bu/acre reduction in national average yield equates to a 204.5-million-bushel reduction in U.S. production. This crop year has seen tremendous weather variability making yield estimates highly variable across large sections of the U.S. Corn Belt. Continue reading at Tennessee Market Highlights.

I’ve received several calls about looper numbers increasing in soybeans across West Tennessee. Numbers range from 3 per 25 sweeps to 25 per 25 sweeps. Treatment is recommended when defoliation exceeds 20% from R1 to R6 or if looper numbers exceed 19 per 25 sweeps. It’s often suggested to ignore small worms (<1/2 inch) in these counts due to predators and entomopathogens taking a substantial toll on their survival.

Pyrethroid additions, at R3 fungicide timing, can exacerbate looper numbers and shouldn’t be included unless they are needed. This is one of the reasons I caution against including an automatic pyrethroid with fungicides at R3 and those applications won’t have any measurable impact on stink bug numbers when the beans hit R5. Loopers are one of the top pests encountered in late planted soybeans and are the most expensive to control. Further, I received word from my colleagues in Mississippi that low rates of diamides (1.2 fl oz/a Vantacor, 7.0 fl oz/a Besiege, 14.0 fl oz/a Prevathon) are providing unacceptable levels of control in large populations of loopers. This isn’t a surprise but take caution when utilizing diamides. Reports of diamide slippage on loopers has occurred for several years and more often than not, it occurs when low rates are utilized against high numbers (>1.5X threshold). Another product, Intrepid 2F (methoxyfenozide), has also had some control issues in Arkansas and Mississippi. Rates of 4.0 and 6.0 fl oz/a did not provide satisfactory control of loopers 7 days after application; however, Intrepid Edge (methoxyfenozide + spinetoram) performed very well. We have several insecticide options available at our disposal but if you’re facing large numbers, low rates of any product (especially the diamides) probably won’t cut it.

One final comment, don’t confuse soybean loopers with green cloverworms. Loopers have 2 pairs of prolegs cloverworms have 3 (see images below). Cloverworms are much easier to control than loopers and pyrethroids, as well as other insecticides, work well. Information on insecticide options for loopers can be found here: https://guide.utcrops.com/soybean/soybean-insect-guide/soybean-looper/

As the time to start harvesting corn quickly approaches, we have had a few calls about scouting for ear rots and managing mycotoxins. END_OF_DOCUMENT_TOKEN_TO_BE_REPLACED