Corn, soybeans, and wheat were down; cotton was mixed for the week.

Is the harvest low in for corn and soybeans?

December corn futures established a six-month low on July 22nd at $5.61 ¾. Since then, prices have increased nearly 50 cents closing the week at $6.10. Similarly, November soybeans had a six-month low, of $12.88 ½ before subsequently increasing to $14.08 ¾ on August 5th. Recent moves in futures markets and the drier/hot forecast for August in many production regions would tend to support higher prices moving forward. However, this year has been filled with volatility and abrupt changes in direction, so a challenge to current harvest lows cannot be ruled out. To give examples of the volatility, one only needs to look at the last 20 trading days. In 11 of the last 20 trading days the November soybean contract has seen daily moves of greater than 25 cents, including moves of 62 and 62.5 cents down and 37.75 and 38 cents up. For December corn, 9 of the last 20 trading days have had daily changes of greater than 10 cents, including a 42.5 cent decrease and a 19.5 cent increase). Simply stated, markets still have a tremendous amount of uncertainty and daily price swings are reflecting that uncertainty. Continue reading at Tennessee Market Highlights. 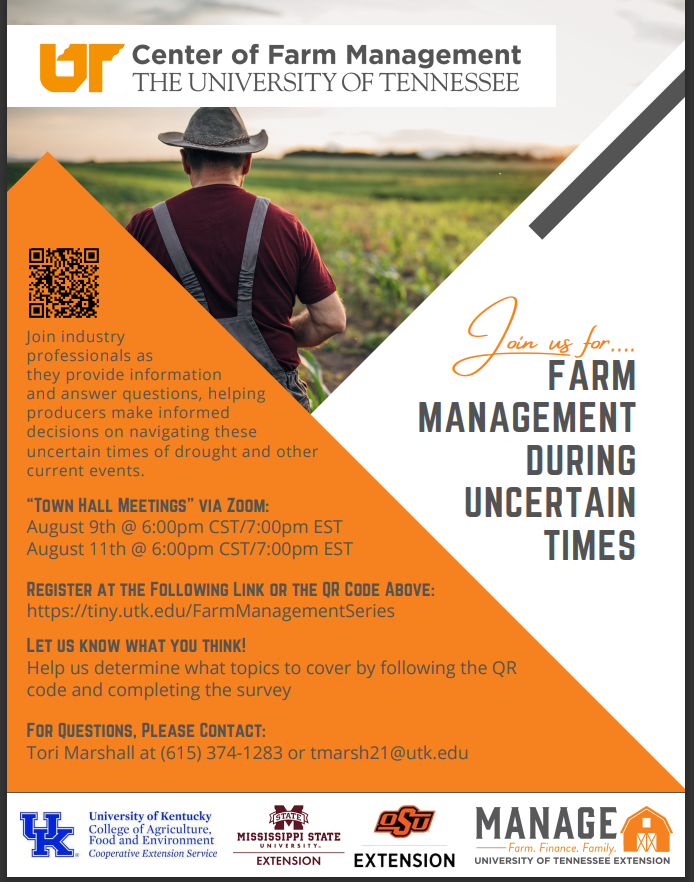 The UT Center of Farm Management will be hosting an upcoming program titled “Farm Management During Uncertain Times.” The program will include a series of “town-hall meetings” via Zoom as well as a library of recorded videos (available August 9th) that producers can access any time. The goal of this series is to provide resources and information to help producers make informed decisions as they navigate the uncertainty of production during drought, rising interest rates, and other current events. Please register at the link below to receive the webinar information for the town-hall meetings. The series is free and accessible to any producer interested.

We are quickly approaching the period of time in which we typically apply PGRs.  Unfortunately, May was not kind and June has been dry.  Many are struggling with figuring out when to start PGR applications and how aggressive we should be with that first application.  In this blog, I link to our most recent Cotton Specialists’ Corner podcast on this very issue.  This episode highlights several things to keep in mind before we run a stiff rate of PGR to an already stressed plant and potentially hurt yields.

END_OF_DOCUMENT_TOKEN_TO_BE_REPLACED

Corn, cotton, and wheat were down; soybeans were up for the week.

Harvest corn futures are now over 40 cents lower than the May 17th high of $7.65 ½. Planting has progressed substantially the past two weeks and is now approaching the 5-year average nationally. Additionally, most of the corn belt has favorable soil moisture. There is still a lot of time in the growing season, and late planting could affect national average yield, but crop conditions have improved. Weather will continue to dictate market direction until the next major USDA report, which will be the June 30th Acreage report. Continue reading at Tennessee Market Highlights.

This crop progress report for Tennessee and the U.S. is as of and for the week ending May 08, 2022. In West Tennessee, corn and soybean planting was in full swing. Cotton planting got off to a good start, with farmers expecting to make more progress soon due to anticipated warm, dry conditions. Cattle and pasture conditions remained good. In Middle Tennessee, corn planting neared completion despite sporadic showers delaying planting in some areas. Livestock producers started their first cutting of hay. In East Tennessee, the weather was a mixed bag, with some areas reporting pastures being in great shape due to mild temperatures and adequate rainfall, but other areas reporting extremely dry conditions. There were 4.5 days suitable for field work.

Corn and soybeans were down; wheat was up; cotton was mixed for the week.

Drought continues to persist in the western half of the U.S. As of May 3, the USDA estimated
that 23% of corn, 56% of cotton, 14% of soybean, and 69% of winter wheat production were in areas experiencing drought. 22% of winter wheat and 36% of cotton were estimated to be in extreme-to-exceptional drought, compared to only 4% for corn and 1% for soybeans. There may be some relief in the 7-day forecast for the southern plains, however it is likely insufficient to provide substantial relief. The seven-day forecast also has 1-3 inches of precipitation in the Northern Plains and Eastern Corn Belt, which could contribute to additional plantings delays. USDA estimated corn planting progress at 14% compared to the 5-year average of 33% as of May 1. Continue reading at Tennessee Market Highlights.

Corn and cotton were up; wheat was down; soybeans were mixed for the week.
New harvest contract highs for corn and cotton were set this week. The last time the December corn contract was this high was 2012. That year the December contract peaked at $8.38 ¾ on August 21. Where was the December 2012 contract at the end of April? $5.43 ¼. The contract added nearly $3.00 between the end of April and the third week in August. Every year is different, and some weather concerns are factored into the current futures price, however if weather conditions are uncooperative over the next four months, we likely have another substantial leg up in this year’s corn market. Weather and the war between Russia and Ukraine will continue to make markets unpredictable and dramatic movements up or down can not be ruled out at this juncture. Continue reading at Tennessee Market Highlights.