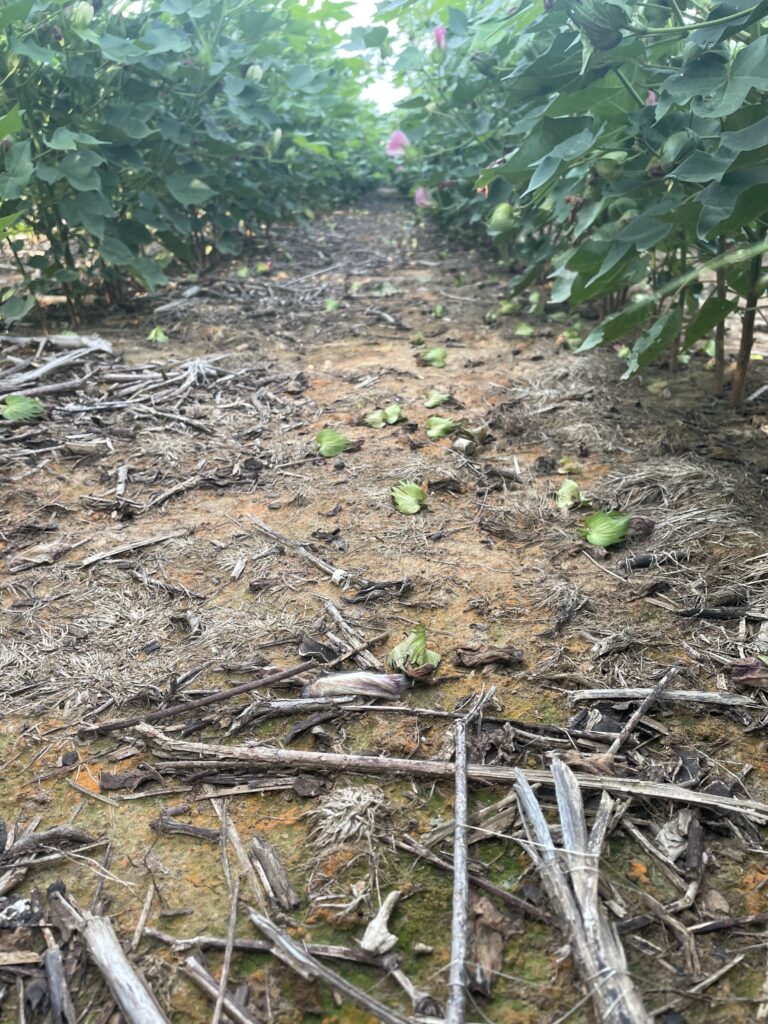 Rainfall was welcomed during the Milan No-till event last week and has continued since, with decent chances in the forecast over the weeks to come.  Questions this week have mainly concerned our first major fruit shed event, the ‘switch’, what to do about it. In this blog, I attempt to tackle plant growth management decisions as we quickly approach our last effective bloom date.

I’ve been surprised by how quickly several of our cotton fields here in Jackson responded to the rainfall.  Like many fields in West Tennessee, my cotton on the station hadn’t yet seen the dry fertilizer we applied in early June; the rainfall last week was the first which was large enough to move the applied fertilizer into the effective rooting zone.  You can still easily watch a rabbit run through some of the fields here, but a number of them have lapped since the rain.

Generally, retention across the area has been exceptionally high.  As expected, we began to see retention slide downward relatively quickly with the cloudy weather and rainfall.  Coupled with the flush of fertilizer moved into the effective rooting zone, we are already witnessing a considerable flush of vegetative growth. As I’ve visited with those within TN and the Midsouth over the past week, three points have consistently come up in conversation.

Second, we need to be aggressive in restricting plant growth.  Light penetration into the canopy is going to be critical if we are going to hold fruiting positions on the plant.  Fortunately, our earlier planted acres which are hovering around 2-3 NAWF are naturally focused on boll fill.  In contrast, our later planted acres have shifted focus away from reproductive growth and towards vegetative growth, evidenced by the light color of the uppermost leaves, characteristic of a very rapidly growing canopy. The impact of this shed event will clearly be greatest in the later planted acres.  Right now, we need to make sure we have the reigns; plant growth cannot go unchecked.  For acres that haven’t yet seen an application, 16 to 24 oz of a 4.2% mepiquat chloride product is likely warranted.  Even if you apply the higher end of that range (24 oz),  monitor growth 7 days after the initial application and re-apply if internode lengths exceed 2.5″.  Even with an aggressive strategy, it is going to be difficult to prevent a switch in this crop given the amount of available nitrogen in the profile.

Finally, we will likely have some challenges as we move into defoliation.  After our earliest planted acres reach NAWF 0, we will see vegetative growth resume on the plant.   I do not believe we can effectively restrict the development of this new growth. On our earliest planted, cutout acres, we should have an excellent opportunity to run higher rates of thidiazuron and ethephon to generate the greatest levels of juvenile and mature leaf drop, given our temperatures stay within an adequate range.  Outside of that scenario, I believe we will generally have to take a two shot approach and should expect real challenges removing juvenile leaves low in the canopy.  More to come on that in the coming weeks.

Again, it is hard to believe how much the crop has changed in the past 10 days.  We definitely have some major management hurdles to jump before we make it to the end but considering, we are in a pretty good spot.