We can learn a great deal by comparing notes.  Slicing bolls is one of the best ways to time defoliation- and most agree on what represents a ‘mature’ boll (dark seed coat color, no jelly in seed, hard to slice with a sharp knife).  But when it comes down to it, there is a large amount of variation in what each of us, as agronomists, consider to be a boll that could potentially be opened by ethephon.  With cool temperatures in the forecast on what remains a late crop, many are trying to figure out which bolls might be opened with an application and when to start.  To get the conversation started, I texted the above picture to a few dozen individuals within the industry to get their thoughts on this question- what is the lowest number boll you believe you can open with ethephon?

Before we get to the results, it is worthwhile to provide a little background on survey participants.  This survey was absolutely not all-encompassing- I definitely didn’t reach out to all experienced and respected defoliation practitioners- but I tried to target agronomists, growers, consultants, experienced salesmen, and specialists with years of experience defoliating cotton.  Most participants were within the Midsouth our Southeast, but several were either currently working or trained west of the Mississippi. Special thanks to Dr. Guy Collins for also distributing this survey through our neighboring state of North Carolina- a decent chunk of respondents included are from NC.

The image below includes a few notes on the observed differences as numbers progress from immature (Boll 1) to mature and cracked (Boll 12).  Note the breaks of no jelly within the seed at Boll 6, faint seed coat color at Boll 8, difficulty cutting Boll 9 and completely mature seed at Boll 11.  Before you read through the rest of this blog, answer the question yourself!  What is the lowest number boll you believe you can open with ethephon? 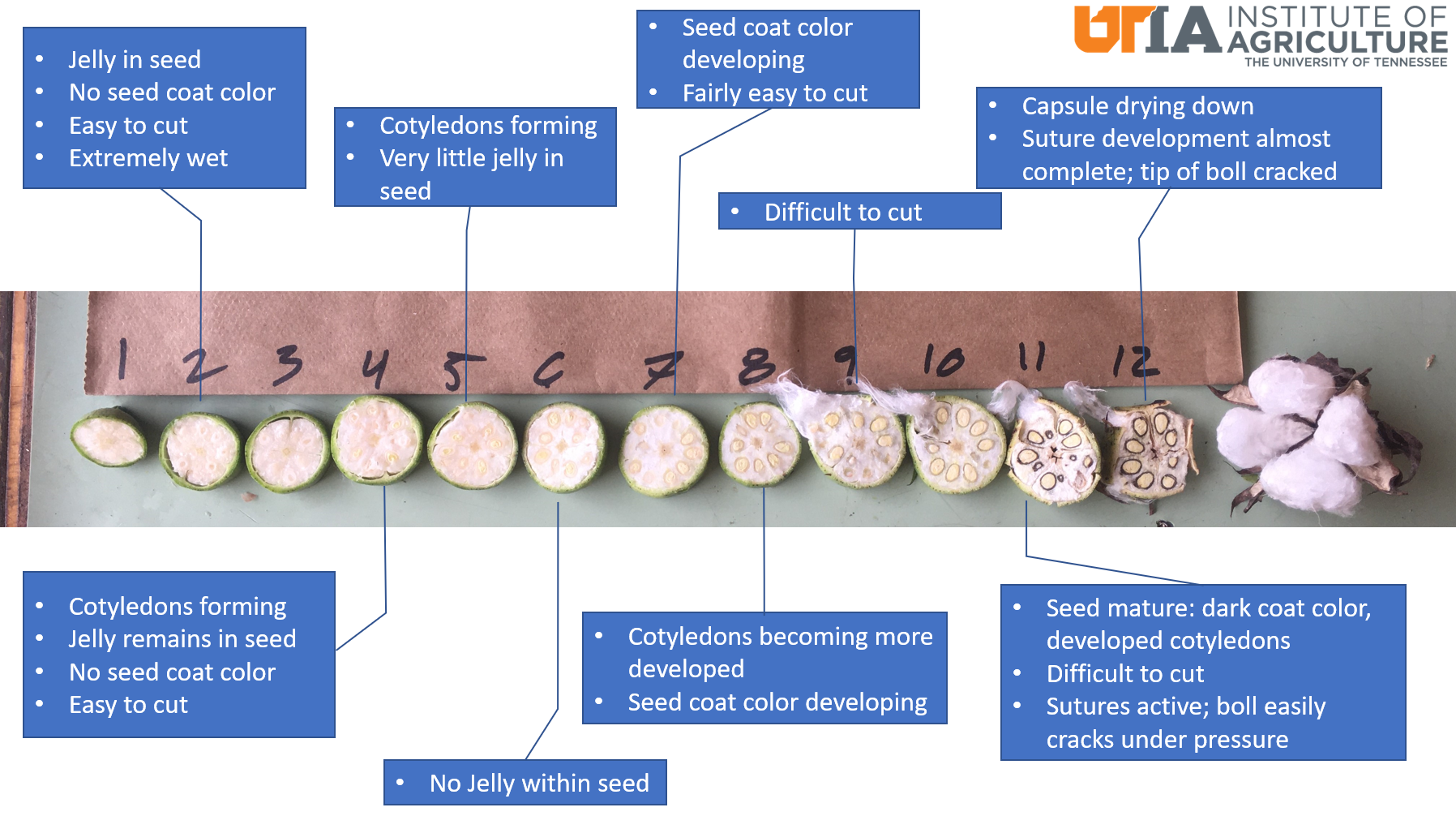 One last thought before I share the survey results- I always thought economists were terrible about answering questions with, ‘it depends. . .’.  After conducting this poll, I believe agronomists are even worse!  The vast majority of respondents immediately stated a range followed by conditional statements pertaining to sunlight, temperatures, or harvestability.  Jokes aside, these points are valid and will definitely influence which of the above bolls will open with an application of ethephon.  In hindsight, I could have probably worded the question better.  When pressed, I often clarified the question with something along the lines of ‘what number boll would be the lowest you think you could harvest?’

In all, I analyzed 44 responses.  Here are the results: 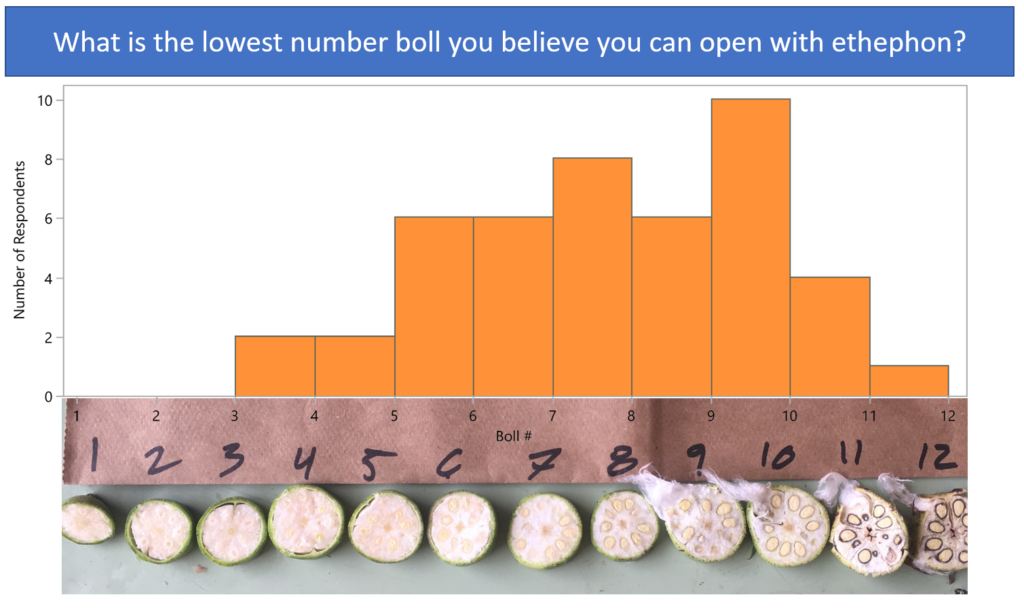 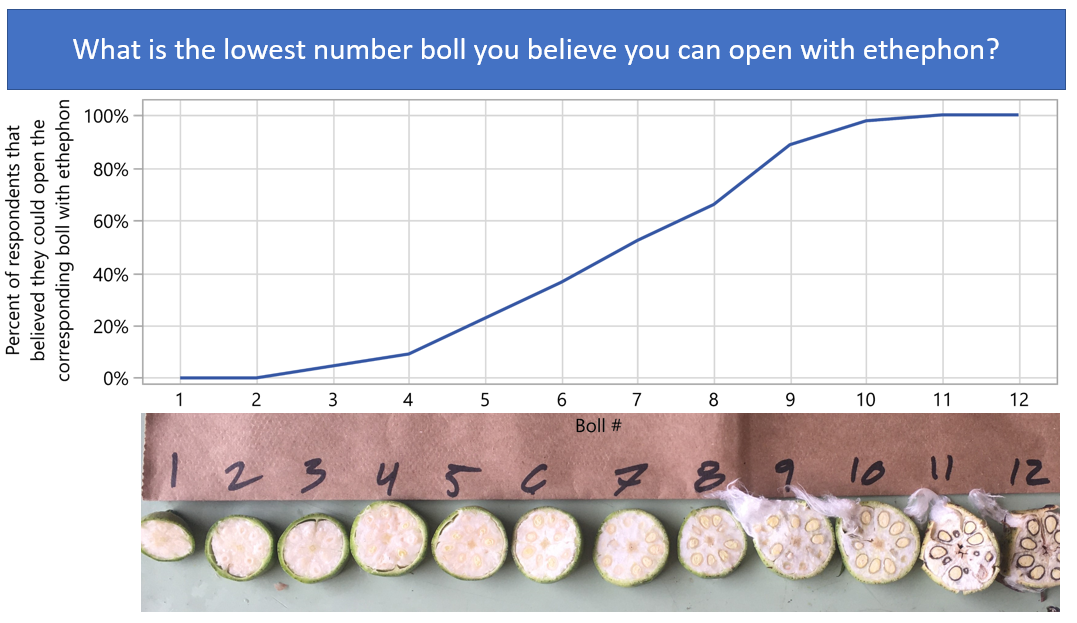 A couple of points on this figure:

100% of the respondents (all 44) believed they could use ethephon to open a boll that was difficult to cut, had a dark seed coat color, and had no jelly within the seed (Boll 11).

70% of the respondents believed they could use ethephon to open a boll that had faint seed coat color, no jelly within the seed, but the boll was still easy to cut (Boll 8).

Less than 40% of respondents believed they could use ethephon to open a boll that had just lost all jelly within the seed but was easy to cut and lacked seed coat color (Boll 6).

Less than 25% of respondents believed they could use ethephon to open a boll which had jelly within the seed (Boll 5).

Take home:  If the calendar will allow, don’t defoliate until the uppermost boll you intend to harvest has lost all jelly within the seed and the seed coat is beginning to show faint color.  If you can wait until this point, the majority of participants in this poll believe you’ll be able to open that boll.

Special thanks to all of the survey participants!