This picture (Picture 1) was taken just 4 days after a dicamba + glyphosate + clethodim application on 3” Palmer amaranth. Judging from some experience with this Palmer population, the growth after application would suggest it will likely survive. When we revisited the site indeed it had (Picture 2). Fields infested with similar Palmer populations are scattered about in a few counties in West and Middle TN. As such, there will be no substitute for first hand observation to determine if Palmer amaranth is recovering from a dicamba or Enlist application.

In our research more dicamba sensitive Palmer amaranth will often be dead or well on their way under good heat and moisture conditions in 7 days or so.  Palmer that is showing regrowth from the apical meristem or lateral buds around  7 to 10 days after application often will live. Experience from last year would indicate that not only will they live but after a short pause will become quite competitive.

These populations that are recovering need a follow-up herbicide application no later than 14 days after the initial application. In 2020, Palmer amaranth that escaped dicamba was often not sprayed again for 24 days or more.  It was far too late for that 2nd application to provide good control.  As such some applicators had to spray the same Palmer 3 times in order to get partial control.

The best herbicide to remove these escaped Palmer amaranths is glufosinate (Liberty). In Xtend soybeans where glufosinate is not an option then the best strategy is another application of dicamba.  Experience from last year showed that another dicamba application within 14 days of the first often, but not always, provided good control.

In Enlist crops always tankmix glufosinate and 2,4-D (Enlist One).  That tankmix has provided good control of Palmer populations that would otherwise have escaped an Enlist One and glyphosate application.

Since glufosinate is the key to controlling Palmer amaranth in Xtend and Enlist crops please remember some of the basic application rules that optimize Palmer amaranth control with that herbicide.  Liberty works best during hot, humid and sunny days. Time of day for applications is also extremely crucial for the best control of Palmer amaranth. Applications closer to the middle of the day result in better control compared to those early morning and at night (Figure 1 ). More information can be found at Liberty Time-of-Day. Another option is at Improving Liberty Control. 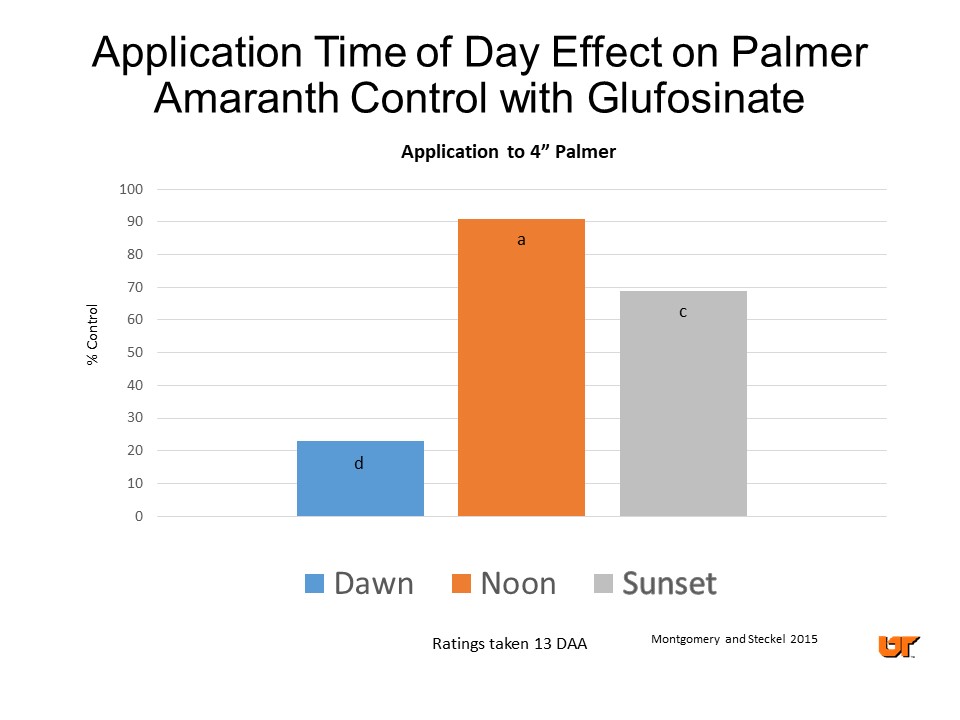