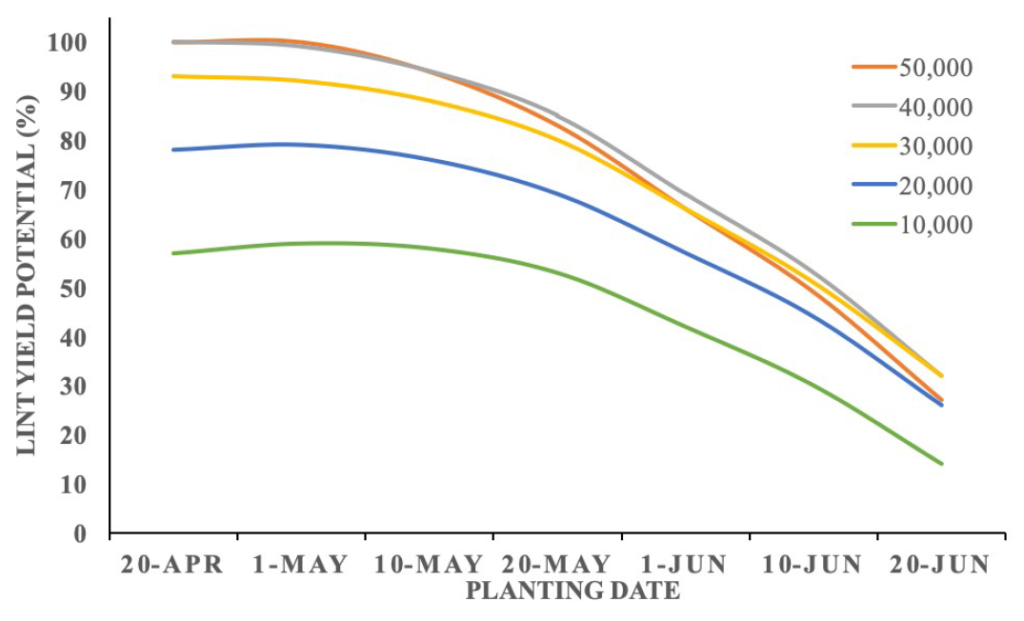 With the majority of our cotton acreage yet to be planted, many have asked how late should I plant?  To answer that question, you must estimate current lint yield potential.  Dr. Shawn Butler, who recently finished his PhD in the UT Cotton Agronomy Program, compiled data from 10 field trials in Tennessee, Mississippi and Missouri to assist those interested in estimating lint yield potential based on planting date and plant population (not seeding rate, but actual plants emerged per acre). The figure above was generated with that data.

Second, this data was generated with DP 1522 B2XF- an early-mid maturing variety.  If planting a mid-maturing variety, I would argue the rate of decline after May 20th will be considerably larger.  As such, it is very important to consider variety maturity as we move closer to June.  Based on historical average accumulated heat units, we will likely need to move towards early maturing cultivars.

Unfortunately, our late April/early May planted cotton has struggled and, in some areas, failed.  Dr. Butler and I recently incorporated data from his dissertation into a replant guide which can be accessed here.

One last item- Dr. Chris Boyer is currently updating a blog post from last May concerning prevented planting.  As soon as that is complete, it will be posted and emailed to those on our emailing list.  As always, if you have any questions feel free to reach out.