Boron is associated with cell wall biosynthesis, cell wall structure, membrane function, pollen germination, pollen tube growth, and carbohydrate metabolism; hence, insufficient supply can severely impair crop performance, and ultimately result in sub-optimal yields.
Boron deficiency symptoms vary among crops, but, are often noticed on the youngest leaves or terminal buds since boron is not very mobile within the plant. In some crops, deficiency symptoms appear as misshaped leaf blades (Fig. 1). Failure of seed and fruit set has been observed on boron deficient soils (Fig. 2). Deficiency in boron during flowering and fruit may reduce the retention of bud flowers and developing fruits. Some boron deficient crops tend to have short internodes and swollen nodes giving the crops a bush appearance.

There is a great deal of discussion about the need for boron in corn and soybean production given the yield loss associated with boron deficient soils. However, to date, reports on soybean and corn response to pre-plant fertilizer application of boron have been inconsistent. Yield increase following boron fertilization has been reported on boron deficient soil. Crop response is very critical in developing fertilizer recommendations for mineral nutrients. This is even more important for micronutrients such as boron where over-application can easily result in toxicity and yield loss. Unbiased research trials have been conducted in Tennessee by UTIA Specialists to evaluate pre-plant boron fertilizer effect on wheat, soybean, and corn yields.
Dr. Hughes Savoy, former Soil Fertility Specialist with UTIA conducted an 8-year study at Highland Rim AgResearch and Education Center, Springfield to evaluate pre-plant boron fertilizer application in intensive cropping on forages (2009 – 2014) followed by a corn-wheat-soybean rotation (2015 – 2016). The major findings from his study are noted below:
• In 2016, soil test boron was higher in all the plots fertilized with boron (2 – 8 lbs/ac) compared to the unfertilized plots (0 lbs/a) up to a depth of 24 inches (Table 1).

• Wheat, corn, and soybean yields were statistically similar among the different rates of applied boron despite an increase in boron levels in the soil (Table 2). 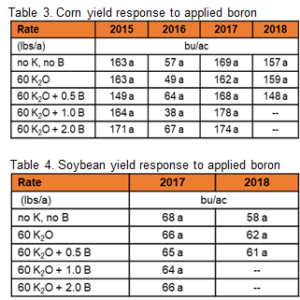 Boron fertilizer application did not provide significant corn and soybean yield increase in any of the UT trials conducted in Tennessee. Unbiased scientific researches have reported similar yield response except in boron deficient soils. The outcome of these studies suggests that there is little evidence that supports boron fertilizer use for corn and soybean production in Tennessee. Producers who decide to use boron fertilizers should pay close attention to their soil test boron levels over the years. Also, if possible, a well-planned and run on-farm strip should be conducted to confirm that the boron fertilizer application is a worthy investment.
Currently, most of the soil supplies adequate amounts of boron for corn and soybean production, except in areas with low organic matter soils and highly leached sandy soils. UT’s current recommendation and guidelines for boron application should be followed. When the boron test is less than 0.8 lbs./acre (Mehlich-1), apply 1.0 lb. of boron per acre annually. Follow up with another soil test in two years. In Tennessee, boron is recommended for alfalfa, broccoli, cauliflower, and cabbage. Boron fertilizer is also recommended for cotton fields with soil pH above 6.0 or has been limed. Detailed information on application rate and conditions for these crops is available at https://ag.tennessee.edu/spp/Pages/soilfertilizerpubs.aspx
Kindly contact your local UT Extension offices if you notice the above boron deficiency symptoms in your field.

2 thoughts on “Does boron fertilizer use increase corn and soybean yields?”