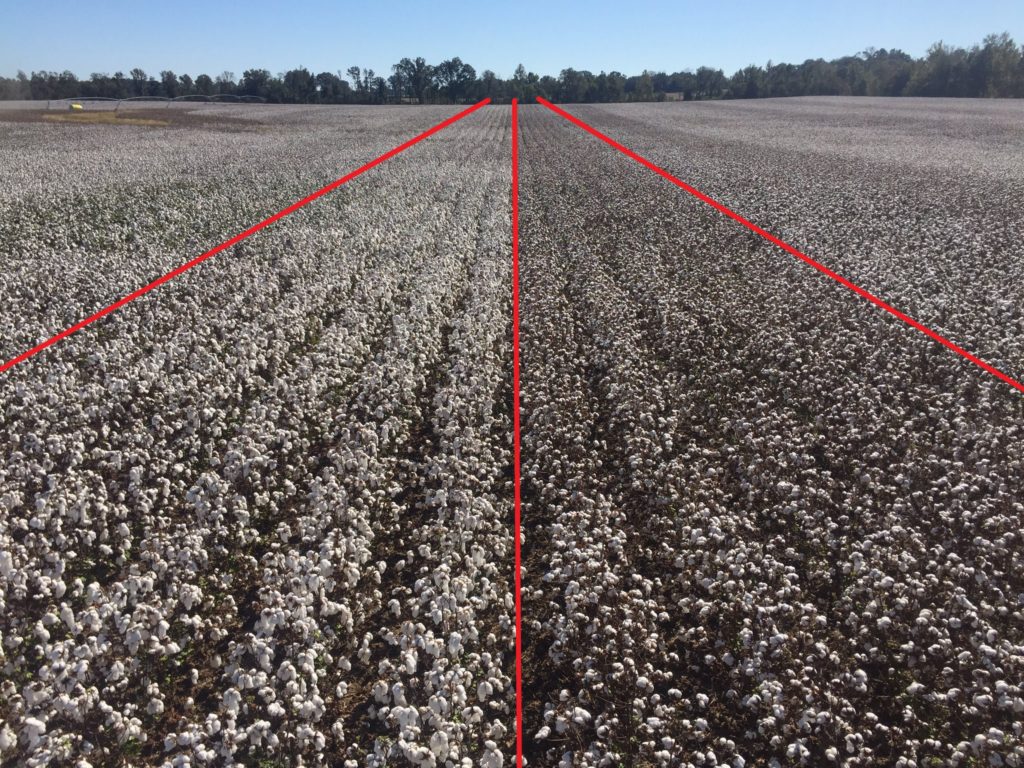 While the finish line is either within sight or has been reached by most, Tennessee still has several acres of cotton in the field.  Several have reported fall out, or seed cotton on the ground, on some of these acres.  There are several methods to estimate yield loss from fall out.  This article explains string-out, fall out, the method for estimating harvest loss from lock counts and covers potential sources of error in the estimate.

Although most of our varieties hold seed cotton in the boll, there are noticeable differences in both lock ‘string-out’ and ‘fall out’ in our commercial varieties.  ‘String-out’ is generally defined as tightness of each lock within an individual boll.  Varieties that are loose in the boll/burr, or string-out considerably, are typically the same varieties that appear to be ‘snow banks’ after opened.  Varieties that are tight in the boll/burr, or do not string-out considerably, do not appear to be as high-yielding from visual inspections.  One of the best examples I have of differences in string-out can be seen in the above image.  Both of these varieties are commercially available and commonly planted within Tennessee. The variety to the left commonly strings-out while the variety to the right is much tighter in the boll.  Seed cotton yield from the left variety was 3,323 lb/acre and seed cotton yield from the right variety was 3,329 lb/acre- not significantly different. Differences in string-out are responsible for the high-yielding appearance of the left versus the low-yielding appearance of the right- even though there is no significant difference in the two whatsoever.

The two pictured varieties represent extremes of our current commercially available varieties; for most of our varieties, differences in string-out will only impact visual differences in the field and/or possibly how ‘clean’ a variety picks.  Still, in extreme cases, yield differences can be noted.  If a variety is very tight in the boll/bur, the picker’s spindles may not grasp the lock and pull it off the plant.  In contrast (and more commonly), if a variety is very loose in the boll/burr, the lock may fall out on the ground before harvest. Given a timely harvest, fall out in our current commercial varieties is typically negligible. However, if harvest is delayed on a variety that is loose in the boll/burr, yield loss due to fall out may be considerable (see below). 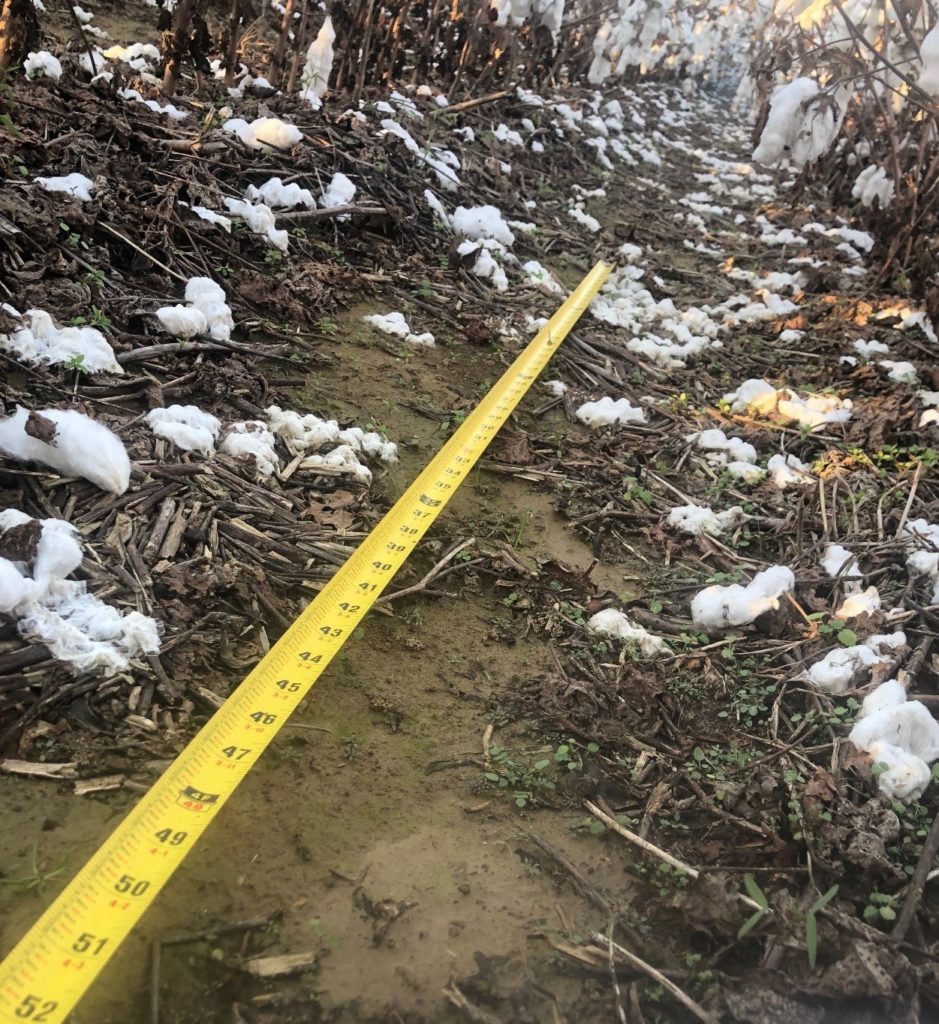 Cotton yield loss from fall out can be difficult to estimate.  While it seems logical to simply pick up the cotton which has fallen to the ground, determine weight and extrapolate to the acre, cotton locks which are on the ground typically stick to soil and or debris.  Removing the trash from collected locks is extremely difficult and time consuming.  If not properly removed, the contaminants can cause yield loss estimates to overshoot actual loss.

In contrast, counting the number of locks is a relatively quick and fairly effective method of estimating yield loss.  The estimator should keep in mind many of the same issues in estimating lint yield from boll counts also impact estimating lint yield loss from lock counts; I highlighted those a few weeks back in a blog covering boll counts.  While counting the number of locks on the ground is typically much faster than counting the number of bolls on a plant, these numbers can vary drastically across a field.  Subsequently, it is extremely important that a large number of measurements be collected from each impacted field. Measurements should focus on areas which appear to best represent the field. Error also arise from variation in the weight of lint in individual locks. 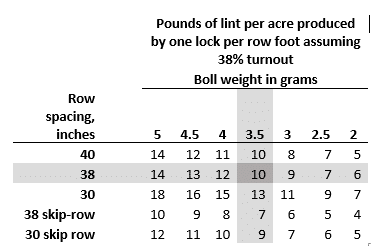 Multiply these two numbers together to estimate lint yield loss in pounds per acre. Note that it takes a considerable number of locks per row foot to generate considerable yield loss.  The number of locks per row foot which must fall to the ground to cause a quarter, half and one 480 lb bale per acre loss at various row spacings and patterns are presented in the below table. 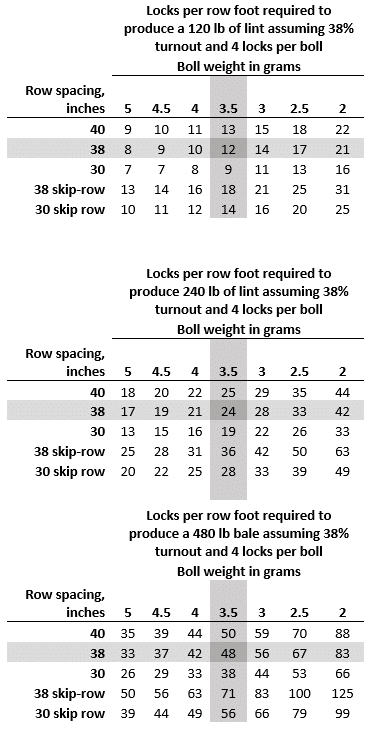 Accurate estimates of yield loss require the estimator to invest a considerable amount of time in each field.  While error will likely exist in even the most careful estimations, a conservative count of locks lost to fall out per row foot will provide a useful estimate.