Taking soil samples this fall? Why not send them for nematode screening? Take the test and beat the pest! Read on to learn how to take soil samples, the importance of soybean cyst nematode (SCN), and what 2018 soil samples revealed with regard to SCN.

Growers are invited to take advantage of the ongoing soil testing for 14 pathogenic nematodes, which is FREE for all Tennessee farmers. Our Sample Collection Form, which also includes soil sampling instructions, is available online (UTcrops.com –> Soybean –> Diseases & Nematodes –> under Publications: Nematode Sampling Guide and Submission Form.pdf. The form should be filled appropriately, and samples collected per instructions and mailed as directed in the form. After samples are received and processed, our lab will communicate nematode results via email.

More information on sampling and pathogen screening can be found in the previous blog article (Free Soil Testing for Pathogens) at news.utcrops.com.

What is soybean cyst nematode (SCN)?

And why does it matter for a grower to know their fields SCN population level?

Soybean cyst nematode (SCN) feeds on soybean plants, affecting growth and reducing yields. Depending on the severity of the SCN infestation, yield loss may be up to 50% when population levels are very high. Population of SCN in fields is determined by counting the number of eggs of SCN found in a representative amount of field soil (usually a 100 cubic centimeters in volume of soil is processed, i.e. about half a coffee mug). The population is high when the soil contains more than 5,000 eggs, moderate when it contains between 2,000 and 5,000 eggs, and the population level is low when the soil contains 200 to 2000 eggs.

What happens to SCN in a field?

Once SCN is in a soybean field, its population can continue to increase if not managed, and even with management, the SCN population can only be reduced. The nematode cannot be completely eliminated from an infested field. The nematode can turn into a dormant form known as a cyst, which can protect and keep the eggs alive for many years, even when there is no food source or good environmental condition that will allow the eggs to hatch. The eggs will remain viable in the cyst in the soil until a susceptible soybean is grown in the field.

What does a high SCN population mean in a soybean field?

A high SCN population will cause high yield loss; moderate population will cause minimal damage and yield may not be affected under favorable growing conditions; and at low population levels damage may not occur but the population may increase rapidly if not controlled. Data from Ohio, shows that a moderate to high SCN population (over 2000 eggs/100 cc soil) may cause over 18 bu/a yield loss on susceptible soybean varieties. SCN can cause yield loss on some resistant soybean varieties also. Many resistant soybean varieties, which have been in continuous use in SCN infested fields for over a decade (e.g. those with resistance from PI88788), can be vulnerable to SCN. Many populations of SCN have adapted and are now able to feed on and cause considerable yield loss on these resistant varieties. Hence, the reason there is an HG type test to evaluate populations ability to overcome known SCN resistant sources, which will be discussed in another article in the coming weeks at news.utcrops.com.

What are the management options, and available resources for growers to avoid yield loss due to SCN?

To avoid yield loss due to SCN, growers are encouraged to know the population level of SCN in their soybean fields – Take the Test, Beat the Pest! They should test their fields at the end of harvest during fall for SCN population level. The best option to reduce SCN population levels is to rotate to a non-host. Suggested non-host crops include grain sorghum, corn, cotton, peanut and rice. Similarly, the source of SCN resistance in a soybean variety should be rotated within a field, although this can be tricky as the majority of SCN resistant varieties all use the same source of SCN resistance (from PI88788). Even in low to moderate SCN population cases, growers should select an appropriate resistant soybean variety to keep SCN population level below damaging threshold and/or use nematicides. Restricting the movement of field soils from one field to another can also help to reduce the chance of spreading SCN (with soil) from infested fields to non-infested one. Resources are available online for growers to search for varieties with different SCN resistance ratings. Specifically, the results of UT variety trials for disease resistance and other variety parameters are available online at https://search.utcrops.com/. Additional resources on SCN can be found at https://www.theSCNcoalition.com/

Field Crop Pathology program at UT has been surveying plant parasitic nematodes including SCN in field soils across Tennessee. A few samples from Gibson and Madison Counties were screened for SCN in 2017 (click here for the 2017 SCN screening results ), whereas 151 samples from 15 TN Counties were screened in 2018. The results of the 2018 screening (Image 1) show that many fields are infested with low level of SCN, while some fields in Dyer, Hardin, Henry, McNairy, and Weakly counties are infested with moderate to high populations. Table 1 provided below gives more information on the 2018 SCN soil test results, particularly on the percentage of sample having different levels of soybean cyst nematode population; the average SCN eggs or Juveniles per County; and total number of sample received per County. 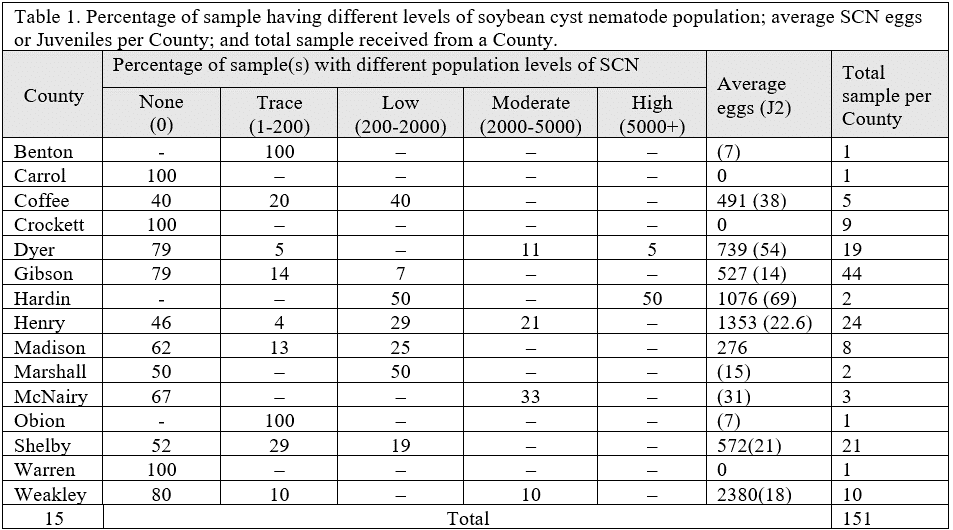