Increased infiltration rates, increased soil water retention, and decreased rates of erosion are frequently mentioned as benefits of integrating a cover crop into a production system.   In order to test these proposed benefits, a site was selected early in 2015 to compare a wheat cover crop versus fallow managementin an irrigated environment.  The selected site was relatively steep hillside (soil was a Providence silt loam and ranged from 4-6% slopes) under a pivot irrigation unit at the Milan Research and Education Center in Milan, TN.  Immediately after the site was selected, four replications of wheat cover crop and winter fallow treatments were established.  An image of a fallow and wheat cover crop treatment can be seen below.  Wheat cover crop treatments were terminated roughly two weeks before planting.  After emergence, soil moisture sensors were placed at multiple depths (3, 9, 18 and 30″) in multiple replications of both treatments. 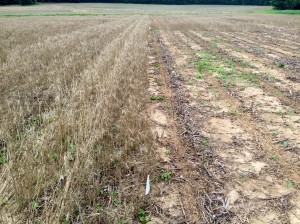 So what was the outcome?

One period of water stress was noted at the end of the effective flowering period (Mid-August).  During this period, average observed soil moisture measured by the sensors was notably greater in plots with a wheat cover crop (see graph below). Additionally, shallow sensors in plots with wheat cover crops were more likely to respond to an irrigation event or rainfall event than shallow sensors in the fallow treatments.  This is also evident by examining the sensor averages across multiple replications over time (again, below).  The increase responsiveness is pictured by the three spikes evident between August 13th and August 20th. 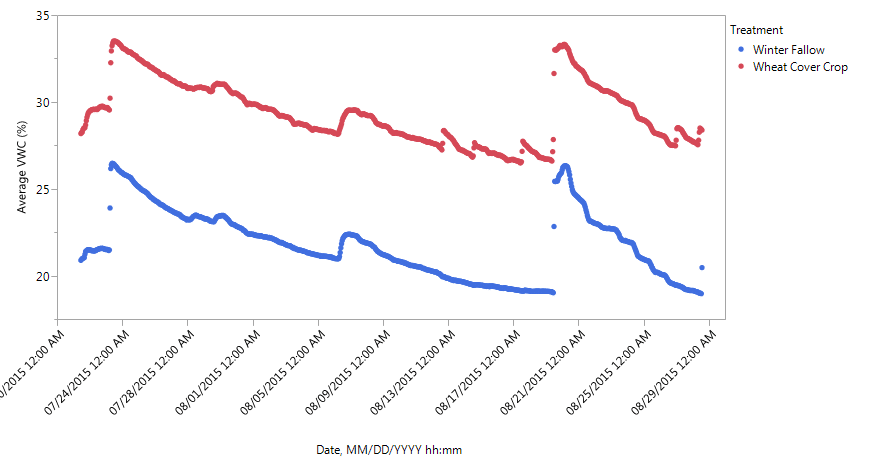 This work was funded by Cotton Incorporated Project Number 15-862: Mid-south irrigation technology demonstration in Tennessee.  Special thanks for their continued support.