General Comments: Much of this article is a blend and update of two articles written last year. Let me start by suggesting there are a lot of negatives and few positives of planting wheat prior to October in Tennessee.

Insecticide Seed Treatment Options for Wheat: In a nutshell, seed treatments offer the greatest value for wheat planted before the recommended fly-free date (approximately October 15th in Tennessee). A post-emergence foliar approach is a viable option if seed treatments are not used (see remarks below). If you plan on using a seed treatment, I’ve included a list of recommended products and use rates for the control of aphids (below). All should help reduce fall transmission of barley yellow dwarf virus by aphids.

All three of these products contain 5 lbs. of active ingredient per gallon and have a similar mode of action. The typical use rates applied by distributors is in the range of 0.8 – 1.0 oz of product per 100 pounds of seed. However, the highest labeled rates are recommended for control of Hessian flies. You should consider using these higher rates if you intend to plant before the recommended planting date, particularly if planting in September. Be advised that seed treatments should not be expected to control fall armyworms that sometimes infest early planted wheat.

Buyer Beware: Insecticide seed treatments are sometimes packaged with fungicides. But you will not get the recommended insecticide rate if applying some of these pre-packaged seed treatments at the labeled rate. For example, “CruiserMaxx for Cereals” and “NipsIt Suite for Cereals” contain insecticide in a much more dilute form than found in Cruiser 5F or NipsIt Inside. These products are typically marketed further north where aphids and BYDV is not a big issue. It would be necessary to add additional insecticide to achieve the recommended rates listed above.

Seed Treatments vs. Foliar Insecticides for Aphid Control: Over the last 6-7 years, we’ve studied how seed treatments or foliar insecticides impact wheat yields. Presumably, most of the effects we have seen are the result of aphid control and a reduction in BYDV as we routinely see both in our tests. The table below summarizes the results of multiple tests done since 2007. Here are some of my observations. Keep in mind that positive yield response to an insecticide seed treatment or foliar insecticide application are fairly consistent but do not always occur. 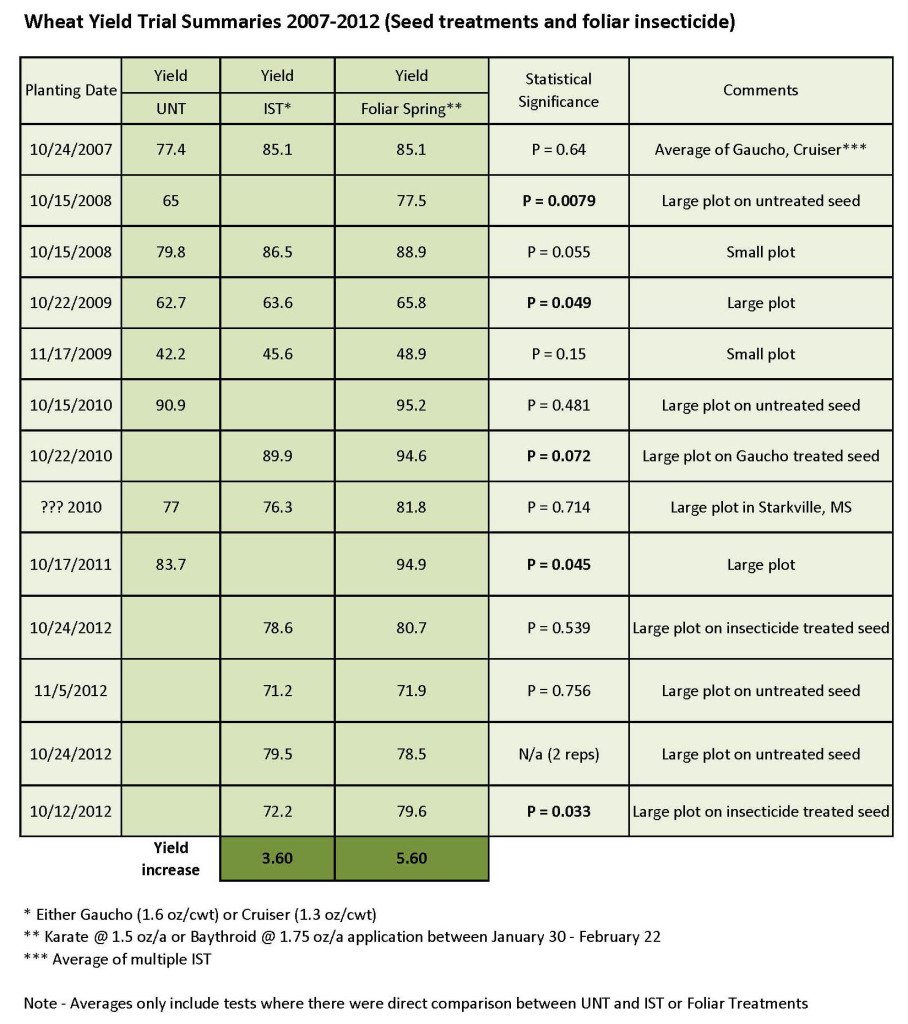 One thought on “Wheat Insect Control Begins with Planting”