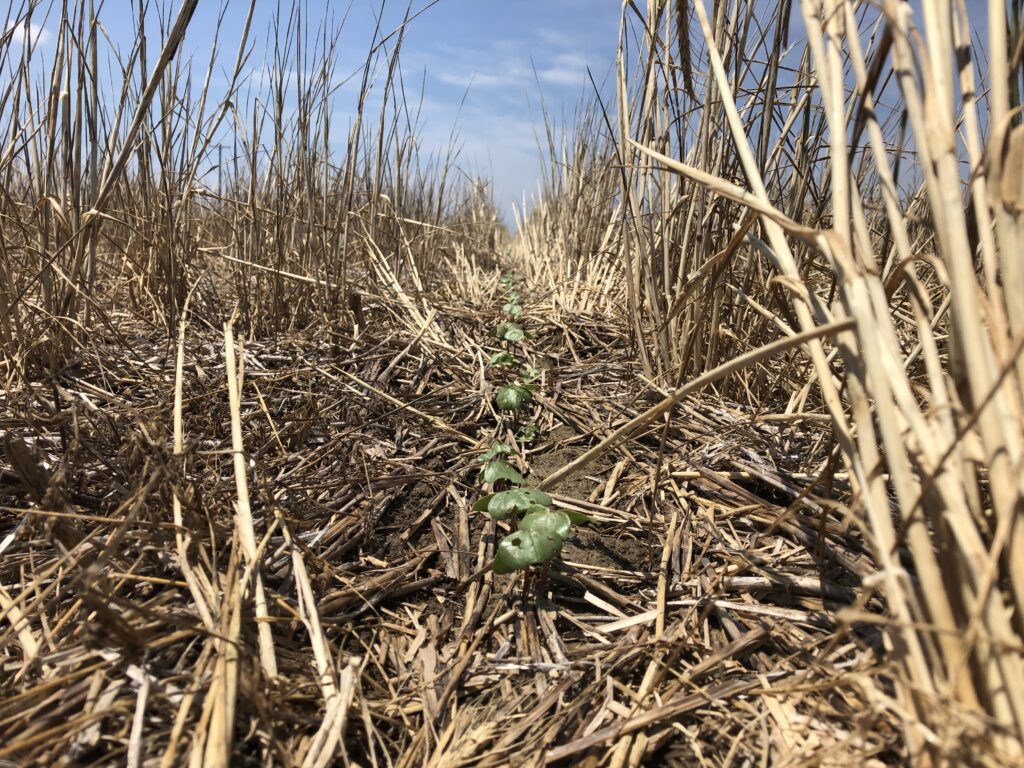 Strong thunderstorms brought heavy rainfall and isolated hail to some areas of the MidSouth last weekend (5/13-5/15).  Reports of hail damage have not been widespread and many welcomed a rather helpful rainfall event.  Still, those who caught hail are assessing their damaged stand and those who caught the heaviest rainfalls are trying to determine if a replant is warranted.  In this blog, I summarize some recent research conducted by the MidSouth Cotton Specialists’ Working Group on hail damage and planting date/populations and discuss the applicability of those findings to our current situation.

During 2016, 2017, and 2018, Dr. Shawn Butler and I led a project with several of the other MidSouth Cotton Specialists which evaluated the role of planting date and population on yield in the MidSouth.  Trials were conducted in Tennessee, Mississippi and Missouri.  A couple of key findings should be considered.  First, yield potential at early planting dates (late April/early May) began to significantly decline when populations fell below 30,000 plants per acre.  However, the data suggested that a marginal stand of 20,000 plants per acre planted in early May had almost the exact same yield potential of an excellent stand of 40,000 plants per acre planted around the 20th of May. 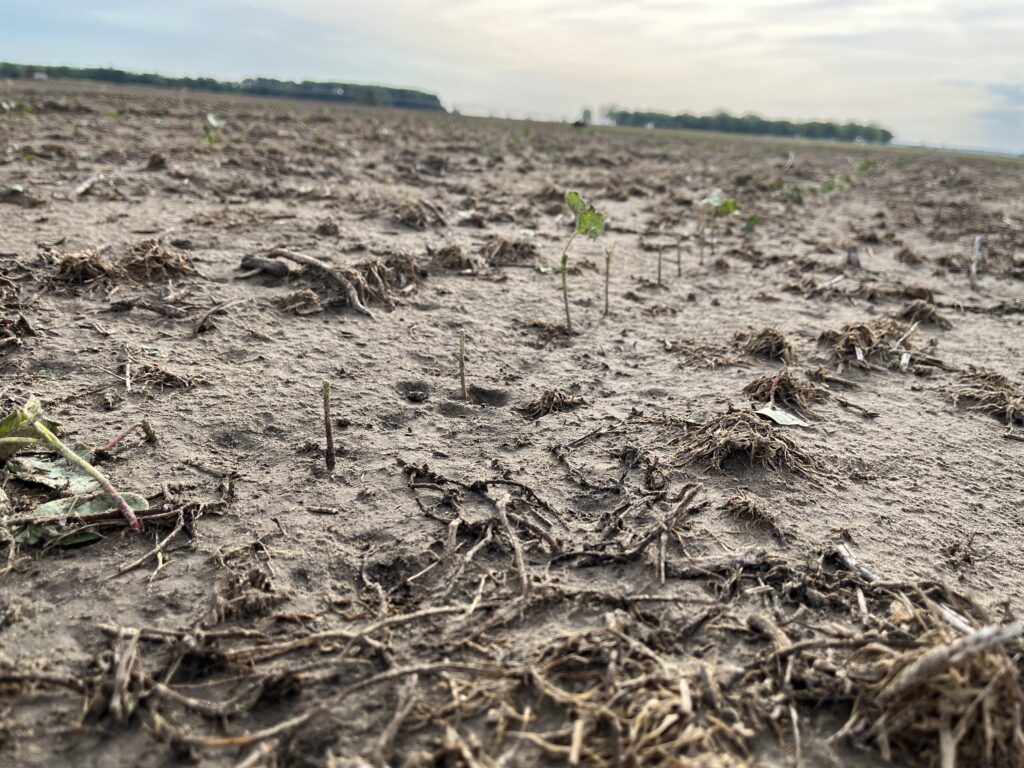 During 2015, 2016, and 2017, my program also completed research trials in Tennessee directed by Dr. Michael Plumblee and Dr. Darrin Dodds of Mississippi State University which evaluated different levels of simulated hail damage at different timings and on different varieties.  Trials were also completed at two locations within Mississippi and one location in Missouri.  Several key findings were identified by this research.  First, larger plants are generally capable of tolerating greater levels of injury and, as you might expect, the more severe the level of injury, the more severe the yield penalty.   Second, the varieties tested did not vary in their response to injury; whether the variety was early maturing or late maturing, both responded to the damage similarly.

Hail damage on a mature plant generally injures a fraction of the overall vegetative material.  In contrast, young plants are more tender and have less energy reserves required to bounce back.  Assessing hail injury is similar to assessing a stand.  Plants which have been damaged below the cotyledonary node should not be counted, as they will likely die.  Plants which have the cotyledonary node but do not have the apical meristem (top part of the stem) will partially recover but will not have normal yield potential.  Additionally, plants with severe damage to the stem will likely die; these plants are more susceptible to disease and will likely not tolerate warm temperatures and even marginally dry conditions.

Based on the planting date and population dataset, we need just shy of 2 plants per row foot to maximize our yields.  Keep in mind that cotton cannot compensate for large skips (greater than 3 feet) and those skips will generally result in decreases in yield potential.  Thin stands (~20,000 plants per acre) are acceptable stands if they are evenly spaced. 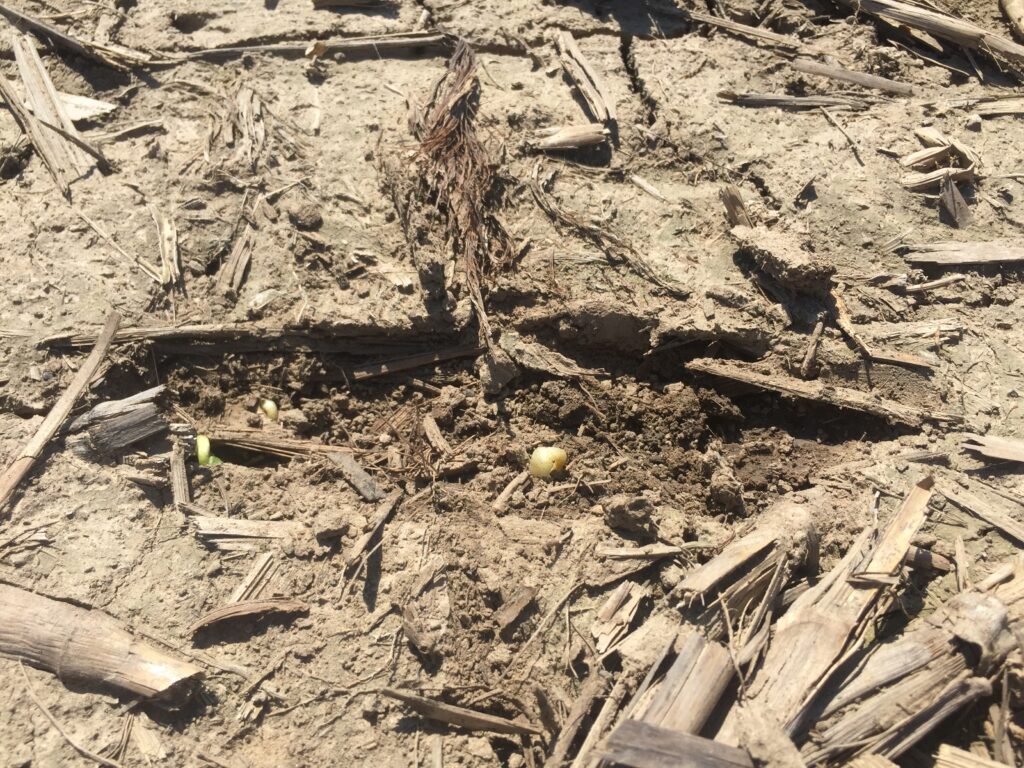 Unfortunately, some were chasing moisture (myself included) prior to these storms.  A hard rain on deep planted seeds is a very tough situation.  Based on our temperatures, I would expect a seedlings to emerge between 5-10 days of planting.  If the stand is difficult to row by day 10, start inspecting seedlings to determine their health and watch the forecast to see if help is on the way.  The seedling in the center of the picture above was under a 1/4″ crust and it was not going to emerge without help (light rainfall or rotary hoe); the stem was extremely swollen and it appeared to be very close to ‘breaking its’ neck’.

To read more about the replant decision, check out this publication from a couple of years ago: https://extension.tennessee.edu/publications/Documents/W073.pdf