Results from greenhouse experiments and in-field research this summer confirm that our state now has dicamba-resistant (DR) waterhemp. Moreover, our survey of weed escapes this fall sponsored by the Tennessee Soybean Promotion Board has found that waterhemp has spread quickly.

These populations were called to our attention back in the fall of 2019. What we found were soybean fields that were infested exclusively with a significant waterhemp infestation (Picture 1). This in itself raised an eyebrow because until then, finding any more than a stray waterhemp plant in Tennessee was rare.  When we were told that the waterhemp had survived multiple dicamba applications it really got our attention.

The initial greenhouse screen of TN waterhemp was conducted in the spring of 2020 and showed, by having numerus survivors after a 0.5 lb of dicamba, that the population had passed the first test of being dicamba resistant.

The subsequent confirmation tests in the greenhouse and field were conducted by weed scientists, Dr. Bill Johnson, research associate Julie Young, and graduate student Claudia Bland, at Purdue University and by our weeds team at the University of Tennessee.  The waterhemp seed screened in the greenhouse at Purdue was collected in the fall of 2020 from the same areas of fields where the waterhemp had escaped dicamba in 2019.  The waterhemp, in great numbers, had in 2020 once again escaped multiple dicamba applications applied to soybean (Picture 2).  The greenhouse results showed that the waterhemp in these suspect fields needed 4.7 times more dicamba to provide similar control to the normal (susceptible) waterhemp population. Two other greenhouse screens found similar results where the waterhemp from suspect fields were 3.5x and another 5.2x resistant to dicamba compared with the susceptible population.

The field research conducted this summer found that the 1x rate of dicamba (22 ozs/A XtendiMax) provided less than 40% waterhemp control. Doubling the rate to 1 lb of dicamba gave 69% control.  The rate of dicamba needed to provide control that would be considered adequate was 2 lbs (88 ozs XtendiMax) (Figure 1).  In other words, about a 4x rate which would be consistent with the greenhouse results. 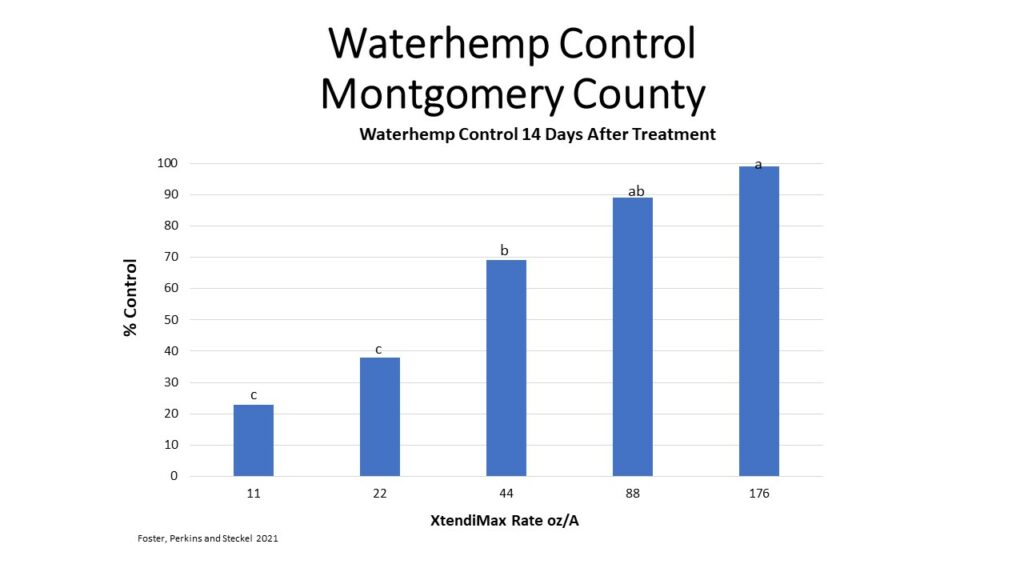 One surprising find in our field research was that though dicamba did not control the waterhemp, 2,4-D did. This was very different than what we have seen with dicamba-resistant Palmer amaranth in TN as, to date, it has always been resistant to 2,4-D as well.

From a weed ecology standpoint, it will be interesting to observe in these fields where both Palmer amaranth and waterhemp are present which one comes out on top.  Regardless which Amaranth species wins, one can safely say the cotton and soybean in these fields will be the losers.  In future blogs we will discuss management of both DR waterhemp and DR Palmer amaranth.