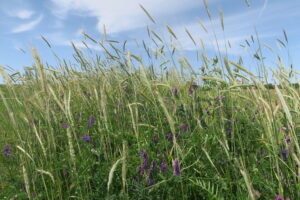 As corn and soybean come out of the fields, it’s time to think about planting cover crops. Cover crops offer many benefits to cash crop systems. They can improve soil health and long-term resiliency, suppress weeds, reduce soil and nutrient losses, and provide nitrogen to your subsequent cash crop. However, it is important to remember that not all cover crop species and varieties are created equal. Just like planting a maturity group 0 soybean in Tennessee is not going to maximize your yield, planting a cover crop species or variety that is not regionally adapted is not going to maximize your benefits.

Which cover crop species/varieties will maximize benefits in a Tennessee production system? Over the past two years, we have conducted cover crop variety trials in Tennessee to help answer that question. The latest results from 2020-2021 can be found here. Pdf and excel files from all years are available at https://search.utcrops.com/cover-crops.

For the 2020 -2021 trial year, public and private institutions were invited to submit entries into an early-planted (~Oct. 1) and/or late-planted (~Nov. 1) test. While research shows that planting earlier will give you the greatest amount of biomass, we do not all have the luxury of getting out in the field to plant a cover by Oct. 1. Because of that, we wanted to identify top performers for either of these common cover crop planting dates. Trials were located in East (Knoxville) and Middle (Spring Hill), Tennessee.

Forty-four early-planted entries and twenty-six late-planted entries were evaluated for cover, weed proportion, and height, over the course of the growing season (Dec., Feb., Apr., May), and biomass, nitrogen release, and forage quality, at two termination timings (Apr. 1, May 1). Entries included single variety monocultures of a cereal, legume, or brassica, and two-species mixes of a cereal and legume variety. Top performers were defined as varieties in the upper 25% or not statistically different from the highest value within a trait.

Top performers for biomass were all cereal monocultures or cereal/legume mixes. This is dissimilar from last year, where legume monocultures were also included in this list. However, several legume varieties did have above average biomass, along with top performance for nitrogen release, fall cover, and/or winter cover. Within this group, top performers for nitrogen released over a 12-wk. period ranged from 24 to 53 lb/ac with an Apr. 1 termination and 48 lb/ac to 71 lb/ac with a May 1. termination.

Cereal/legume mixes combined the best characteristics of both individual groups, with several mixes identified as top performers for biomass, nitrogen release, and winter cover. Brassica entries were not as competitive as cereals and legumes for cover, biomass, or nitrogen release. 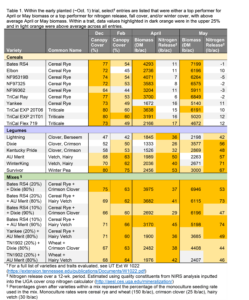 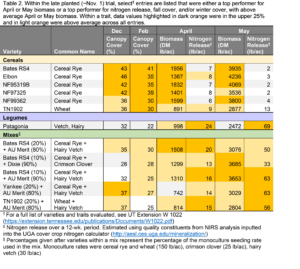