Achieving physiological maturity (R6 or black layer) is the first step towards corn dry down and harvest. The date at which corn black layer forms is dependent on planting date, relative maturity of hybrid, and to some extent planting location in the state.  For example, fields located in extreme Southwest TN will accumulate GDD units faster than other counties for a similar RM hybrid planted the same day.  Because development stages of corn are related to heat unit accumulation, the date of black layer can be predicted fairly accurately for a field if long-term weather data are available.  One such site that can generate black layer prediction charts by county is mrcc.illinois.edu/U2U.

Black layer (R6) is the culmination of starch conversion in the seed during a process requiring about 3 to 3.5 weeks.  A ‘milk line’ or white line display across the kernel indicates amount of hard starch accumulation.  At ¾ milk line, the starch line has moved about ¾ distance down the kernel towards the cob.  When the milk line is no longer visible, a dark brown or black layer of cells form to separate the kernel from the cob, hence the term ‘black layer’. 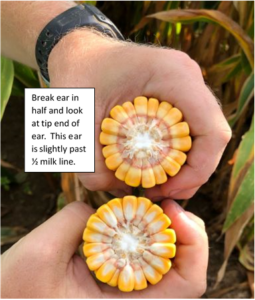 Seed are fully dented at black layer, but grain moisture typically averages above 30 percent.  Mechanical harvest loss and kernel damage are minimal when grain drys to about 25% moisture.  Tennessee grain drydown may be impacted by hybrid characteristics (husk density and coverage) and especially heat unit accumulation, therefore, producers should expect faster drydown rates (about 0.5 percentage point per day) in September compared to October or November.  Regardless of planting date or hybrid, drydown rate ultimately depends on how much warm, low humidity, dry weather a field receives, so although late planted beans may need moisture in September, corn does not during drydown.