If I were to ignore the calendar, I’d rate Tennessee’s cotton crop as above average.  Another half inch of rain would be nice, but considering, it appears things are progressing nicely.  Unfortunately, we are staring at the last effective bloom date with fewer fruiting branches and subsequently fewer bolls on each plant than I’ve observed since I arrived in Tennessee.  In this blog, I highlight a few decisions which we will have to make in the coming weeks and reasons why this crop may fail to fall within the same yield ranges we’ve observed in recent years.

I’ve drawn two graphs below that begin to explain our current situation.  The top panel is accumulated heat units observed at the West Tennessee Research and Education Center, graphed by year, assuming a May 15th planting date.  Note I’ve plotted accumulated heat units by Days After Planting; day 0 is May 15th, day 50 is July 4th, day 100 is August 23rd and day 150 is October 12th. You’ve probably seen heat units presented similarly to the graph in the top panel below, and that definitely shows the challenges associated with 2021.

Even so, I think the top panel doesn’t capture how far behind we are from the 30 year average.  In order to capture that deviance, I’ve subtracted the observed heat unit accumulations for each of the past six years from the 30 year average, calculated from 1980 to 2010.  Those figures are graphed in the bottom panel.  Again, this data was collected from the West Tennessee Research and Education Center in Jackson, but rest assured these trends hold across the entire cotton producing region of the state; temperature is a relatively stable parameter within the region.  Each line represents accumulated heat units from that year minus the 30 year average accumulated by that date.  Observations above the 0 reference line represent warmer than average years.  Observations below the 0 reference represent cooler than average years. 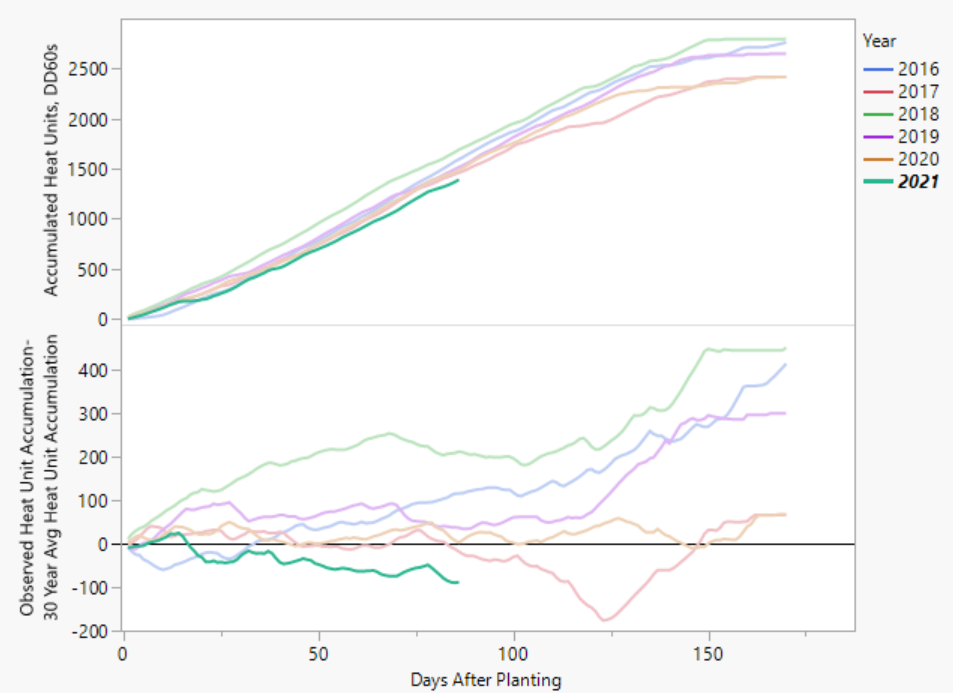 This figure may help rattle your memory for the last 6 years.  Both 2016 and 2018 were warmer than average years.  Although 2017 was characterized by a mild summer, we had an exceptionally warm fall.  The 2019 season was fairly normal until late in the year, when we again noticed a warmer fall than ‘normal’.  Finally, the 2020 season was just about the most ‘normal’ year we’ve experienced in the last 6 years.

Unfortunately, it appears we may be even further behind than heat units suggest. In my opinion, lack of solar radiation during the first two weeks of June and very cool temperatures during that window pushed first fruiting branch up the plant; this year, it is fairly common to find the first sympodial branch on node 7, 8 or 9 instead of 5 or 6.  I believe the loss of sympodial branches low on the plant delayed maturity by another week.

You’re probably thinking ‘great blog, Tyson, what a pick-me-up!’ I sure wish I was telling a different story.  I’m attempting to capture our current situation because we have several very important decisions to make between now and harvest that will be impacted by the extremely late nature of this crop.

First, insecticide terminations.  Node above white flower counts vary depending on planting date, ground and rainfall but overall we are moving toward NAWF 6-7 and if we receive a rain, I believe most fields may ride NAWF 5 for a couple of weeks.  However, for those above I-40, the 30 year average would suggest we will see our last effective bloom for the year in the next few days; blooms after that date have a less than 50% chance of making the picker.  You can read more about last effective bloom dates for the region in this blog from a few years back. We need to accumulate approximately 250-350 heat units after cutout before we can stop managing plant bugs- click here to read Scott Stewart’s comments on insecticide termination from a few years back.  Usually, 350 heat units will accumulate in 14 to 21 days.  If we terminate insecticide applications based on our last effective flowering date of August 15th, that will likely push our last application into the first week of September (again, in a normal year).  You’re going to have to decide in early September whether or not to continue to manage pests in positions above the last effective flower or to cut costs.

Second, defoliants.  I’m not great at predicting the future and I hope this prediction is incorrect- but we will likely not be worried about regrowth control this year; our concern will be opening bolls in low temperatures.  I’d begin working with retail to make sure tribufos, ethephon, and ethephon + cyclanilide products are available for your acres.

Finally, marketing.  Price has climbed recently.  I will not advise on when to sell, but I think it is important for you to know what you have in our current market situation.  I am under the impression that this may be a profitable crop, but it may not be as heavy in the basket as the crops of the past several years.

And one last point- look back at the lower panel of the above figure, specifically at 2016, 2017, 2018 and 2019 between September 17 (day after planting 125) and the end of October (end of the graph).  In all 4 of those years, we accumulated a very large number of heat units over that time frame; 2017 rose from almost 200 below the 30 year average to 100 over the 30 year average during that period; 2016, 2018 and 2019 finished the year between 250 and 400 units above average in a large part due to the heat units accumulated after that Sept. 17th date.  My point- I love a comeback story and I’m not ready to give up on this crop.  Heat in September and October has the potential to push this back into the average or above-average category.