This is part one of a series of blog articles that will focus on some fundamental information on UT fertilizer recommendations for corn. Commonly recommended nutrients for use in corn production in TN include nitrogen (N), phosphorus (P), potassium (K), sulfur (S), and zinc (Zn). Each nutrient will be discussed in terms of the relevant soil test that maybe used or used in recommendation; recommended preplant, starter, sidedress, and foliar fertilizer applications; and plant/tissue analysis. To ensure simplicity and better assimilation of the voluminous information, each nutrient will be featured on a different day of this week. Today’s focus will be on nitrogen (N).

Today’s blog will focus on UT nitrogen recommendations for optimal corn productivity under conditions in TN. Nitrogen is a major component of chlorophyll (the green pigment), that is essential for photosynthesis. Hence, its deficiency tends to cause chlorosis. In addition, inadequate supply of N at critical growth stage can reduce ear size and lead to yield loss.

Plants use N in the nitrate (NO3–) and ammonium (NH4+) forms. However, ammonium levels are generally very low in upland soils so soil nitrate tests are used to measure plant available N and adjust N fertilizer applications for corn. There are two commonly used soil nitrate tests used in the US, the Pre-Plant Nitrate Test (PPNT) and Pre-Sidedress Nitrate Test (PSNT). Soil samples for PPNT is collected prior to preplant N application while PSNT are collected prior to pre-sidedress application.

In TN, only the Pre-sidedress Soil Nitrate Test (PSNT) is recommended for corn production, particularly for producers using animal manure such as poultry litter. Detailed information on sample collection and processing procedure are described in the UT Publication, The Pre-Sidedress Nitrate-N Soil Test (PSNT) For Nitrogen Management in Corn Production Systems of Tennessee. Interpretation of the PSNT in Tennessee is made based on yield potential of the field, soil test level, and field history.

In TN, current N application rate for corn production is based on yield goal. However, adjustment can be made based on past production records and PSNT if applicable. Another tool available for estimating corn N rate is the Nitrogen Rate Calculator at www.utcrops.com.

Information on optimal preplant N application for corn production in TN is limited. Preplant N application in corn is not recommended because of greater risk of N loss through ammonia volatilization and leaching. Corn plant takes up little N (<12% of N uptake during the growing season) until V6 growth state, with the most active period of N uptake occurring at the V8 to V14 growth stage (Figure 1). 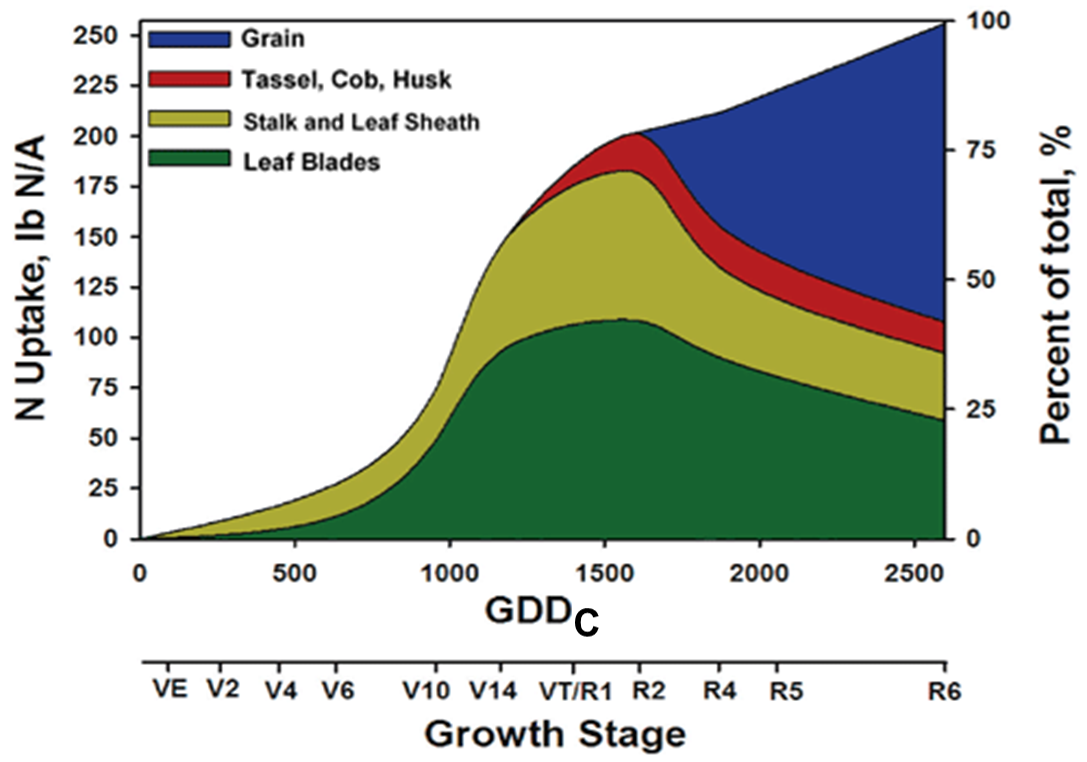 Figure 1. Cumulative nitrogen (N) uptake by corn on a pound-per-acre basis and percentage from VE to R6. GDDC, Growing degree days is the measure of heat accumulation and is used to estimate the growth and development of some agronomic crops (Graph Source: Bender et al., 2013).

Considering there is limited N uptake prior to V8, there is a greater risk for N loss from preplant N depending on management practice, soil properties and environmental condition. Detailed information on common N loss pathways and a reliable strategy to reduce N loss are described in the UT Publication PB1888, Enhanced Efficiency Fertilizers as a Tool to Control Nitrogen Loss in Row Crops Production. In TN, leaching and ammonia volatilization are common N loss pathways. Peak rainfall occurs between April and May (2010-2020) in West TN, where most row crops are produced in TN. The potential for leaching of nitrate is highest during the period of peak rainfall which occurs before the rapid uptake of N by the plant. Surface applied urea-based fertilizers, which are commonly used in TN can be converted to ammonia gas which escapes to the atmosphere (additional information on potential loss is reported below).

The additive effect of most starter fertilizers on corn yield, regardless of placement method is not very consistent, and the discrepancies may partly be attributed to prevailing conditions at planting, management decisions, and tillage practices. Generally, starter fertilizer application tends to increase grain yield when the crop is planted way earlier than the recommended planting date or under poor growing conditions such as low temperature and excessive rainfall. More often, the beneficial effect of starter fertilizers on grain yield are more prominent in soils with conservation tillage practices such as no-till.

Source: Research has shown that a combination of ammonium-N and phosphate for optimum effectiveness of starter fertilizer, except for soils with high soil test P. In addition, placement methods influence the choice of starter materials. Urea, UAN, or DAP (diammonium phosphate) is not recommended for in-furrow or 2×2 because of possible injury to germinating seeds and root inhibition. Ammonium polyphosphate (10-34-0) and monoammonium phosphate (11-52-0) based materials are excellent for in-furrow or 2×2 starter fertilizers. Placement: Currently, “2×2” is the most common starter placement method, where fertilizer is placed 2 inches to the side of and 2 inches below the corn kernel at planting (Figure 2A). An alternate placement method that has gained traction among corn producers is in-furrow or “pop up”, where fertilizer is applied in furrow or placed in contact with the seed (Figure 2B). Other starter placement options that can provide excellent results depending on soil types and environmental conditions include surface dribble or broadcast (Figure 2C).

Rate: Depending on placement method, the recommended rate for starter fertilizer ranges between 10 to 60 lbs. of N per acre, with the low rates recommended for in-furrow or pop up placement and the high rates for surface broadcast placements. It is vey important to follow the product recommendations for in-furrow fertilizer applications.

Sidedress application can be done any time after planting through tasseling, However, in TN sidedress application for corn is recommended between V4 to V6 growth stages. Sidedressing N in addition to starter N or N at planting, commonly referred to as split applications is a more efficient management practice compared to single preplant or at planting applications. Split applications of N may be beneficial when N rates are greater than 120 lbs. per acre. A typical split management practice is to split-apply a third or 60 lbs. N per acre of the recommended N at planting and sidedress the remaining N fertilizer between V4 to V6 growth stage, which is closer to when the plants are actively taking up N. Split application provides some flexibility to adjusting N rate during growing season as compared to just a single application.

Source: Nitrogen fertilizer sources are equal in their ability to supply N if correctly applied. The International Plant and Nutrition Institute (IPNI) developed one-page fact sheets on the various N fertilizer sources and gave a review on their use. Urea-based N fertilizers are more susceptible to ammonia loss when compared to other N sources. Recent study showed that ammonia loss from surface applied urea N fertilizers at sidedress (120 lbs. N per acre) can be more than 20% of the total N applied, which was equivalent to more than 24 lbs. of N acre (Figure 3). 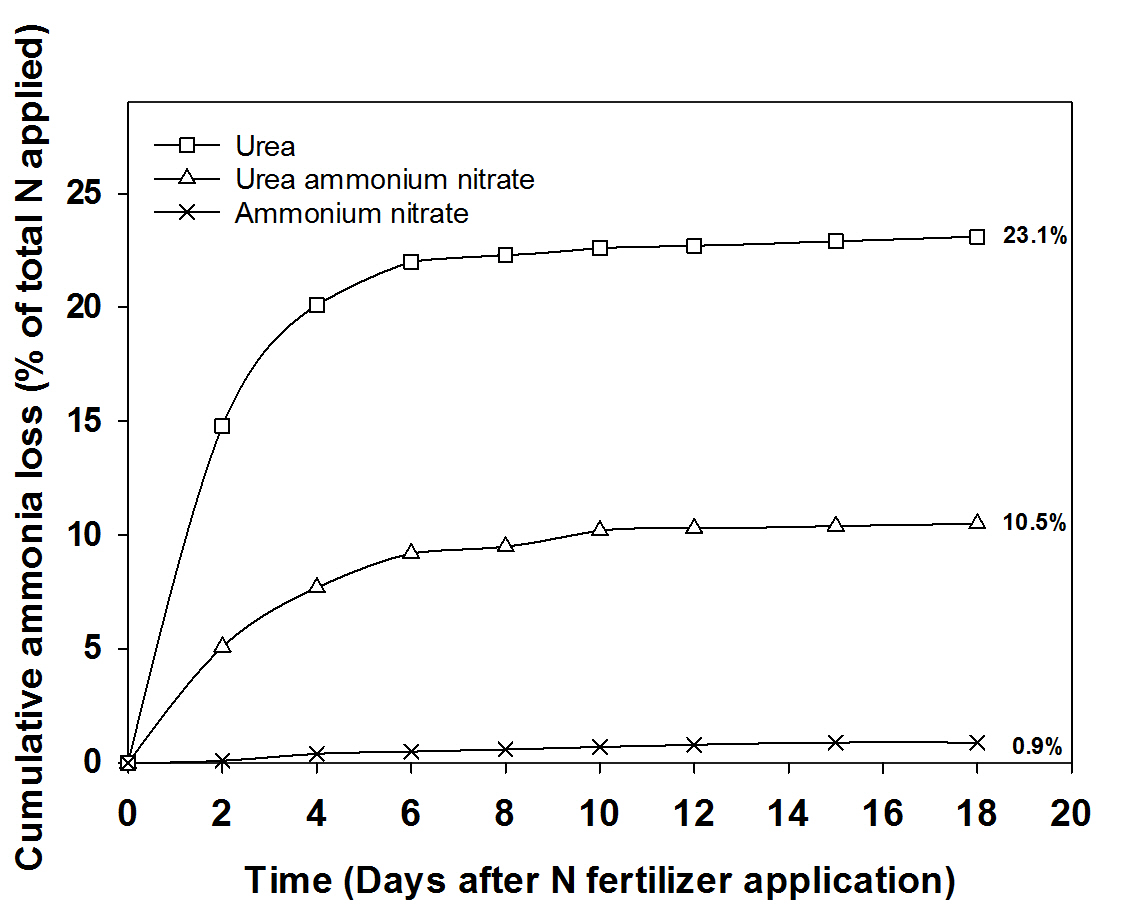 Treating or adding an N stabilizer to urea-based N fertilizer is recommended if at least 1/4’” rainfall is not forecasted within two days after N application. Nitrogen stabilizers can reduce ammonia volatilization by at least 65%, particularly under conditions favorable for ammonia loss (Figure 4). 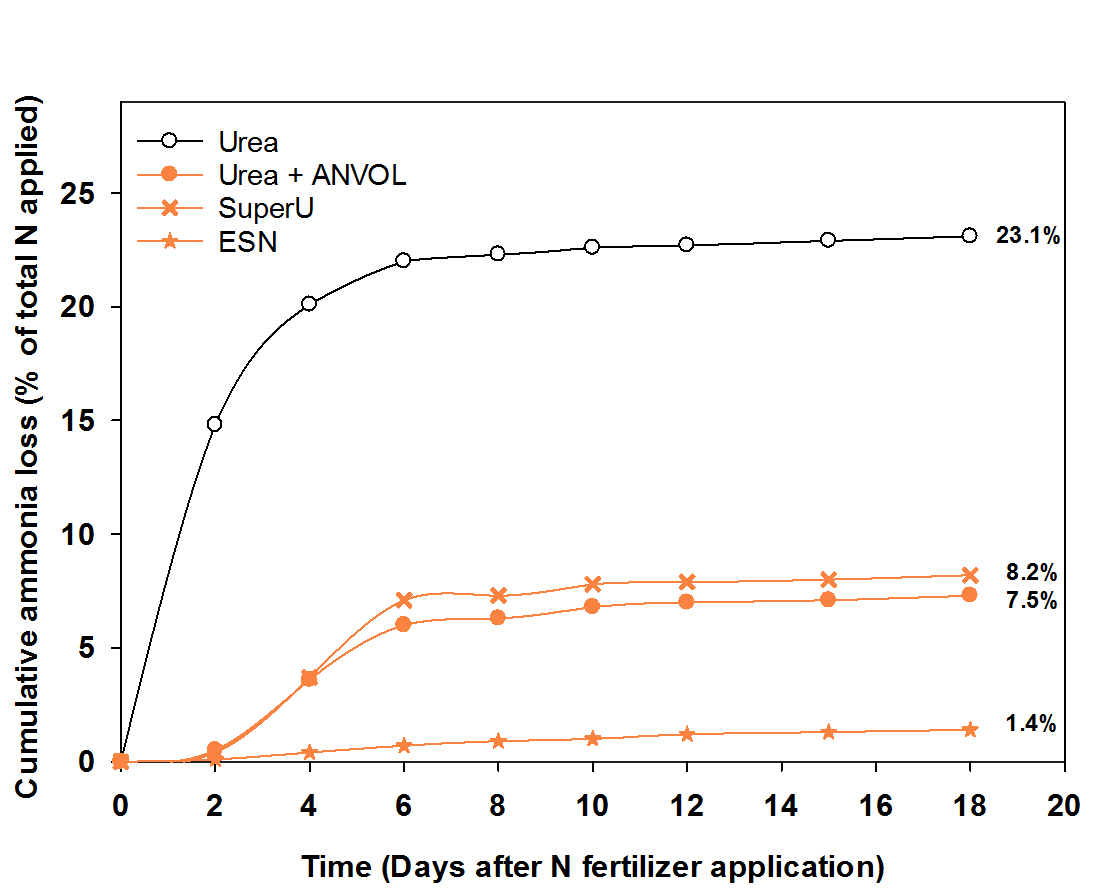 Placement: Broadcasting, injection, dribble between rows, and banding (surface or subsurface) are the common placement methods. Surface applied urea-based N fertilizers are more susceptible to ammonia loss when compared to injection and subsurface banding. Hence, treating or adding N stabilizer to surface applied urea-based N fertilizer is recommended if at least 1/4’” rainfall is not forecasted within two days after N fertilization application. Rate: In TN, recommended N for the growing season is based on yield goal and crop production history. Sidedress application rates may range from 2/3 to all the recommended N.

Foliar fertilizers are not recommended for corn production in TN since unbiased field studies conducted in Tennessee show poor performance of foliar products under our growing conditions.

Plant analysis helps to monitor the N status as well as diagnose deficiency in corn before deficiency symptoms become visible. Accurate interpretation of plant analysis depends on recommended plant parts and growth states. For seedling plants (< 4 inches in height), the whole plant about 1 inch above the soil surface is recommended. For corn at early growth stage (> 4 inches in height to tasseling), the most recently matured leaf (with visible collar) from the tops of 15-20 plants is recommended. For corn plants at tasseling, the earleaf (leaf adjacent to the uppermost developing ear) of 15-20 plants is recommended.

There are two key information that will accurately help you recognize deficiency symptoms, the form and location of symptoms on the affected crop will help guide the diagnosis. Location is where the symptomology occurs on the plant and this largely depends on the mobility of the nutrient within the plant. Nutrients can be classified as mobile or immobile depending on their mobility within the plant. However, for Mobile nutrients can redistributed in the plant. So for mobile nutrients, when there is insufficient supply of nutrients, nutrients in the plant is translocated to newer and growing part of the plants so deficiency symptoms tend to show on older or lower leaves. On the other hand, immobile nutrients have limited mobility within plants and deficiency symptoms occur in younger, upper leaves. Forms associated with deficiency may take several forms including chlorosis, necrosis, and abnormal growth. Chlorosis occurs when the production of chlorophyll is reduced which results in a yellow to pale green leaf color. Necrosis occurs when the plant tissue dies, indicated by the browning of the affect plant part. Abnormal growth occurs when the inadequate amounts of a nutrient in the plant restrict cell elongation and replication. This results in stunted growth, deformation, or crinkled leaves.

Nitrogen is a mobile nutrient as such visual deficiency symptoms occur first on older leaves and the commonly associated forms are chlorosis and abnormal growth.

Leaf: Appear first on older (lower) leaves. V-shaped yellowing starting from the tip and progressing down the midrib towards the base of the leaf. 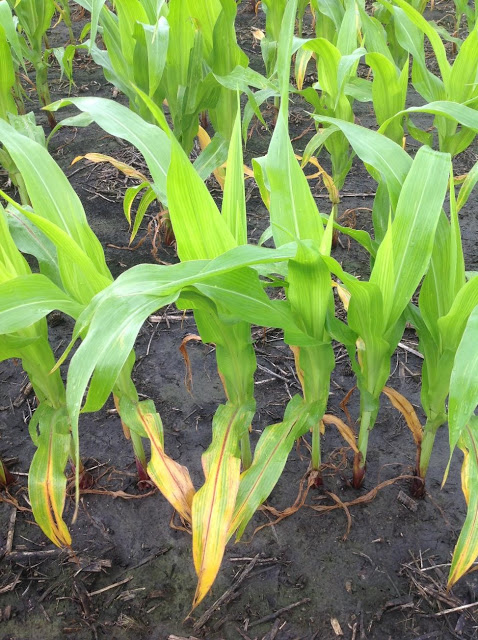 Figure 5: Corn plants with N deficient leaves. Nitrogen deficient leaves exhibiting V-shaped yellowing starting from the tip and progressing down the midrib towards the base of the leaf will appear first on older (lower) leaves. Photo from University of Minnesota Extension.