Early Burndown.  The challenge to burning down grasses before planting has become increasingly difficult in the last half dozen years. There are two reasons for the sketchy grass control with the traditional burndown application of glyphosate + dicamba.  First, the continued evolution of glyphosate resistance in ryegrass, junglerice, johnsongrass and goosegrass have made that “go-to” burndown application inconsistent. Second, we have now documented that dicamba is consistently causing glyphosate to provide poor grass control.  As such our recommendation has been to change the “go-to” burndown from glyphosate + dicamba to glyphosate + clethodim.

The problem with using glyphosate + clethodim is that the burndown will miss, or be weak on, some broadleaf weeds, most notably glyphosate-resistant horseweed.   During the meeting circuit this winter, several have asked “Is there a herbicide that can be added to glyphosate + clethodim that will provide horseweed control while not sacrificing grass control?” This caused me to go back and examine burndown research we conducted 4 and 5 years ago with Elevore and Verdict.

The results of one study with Elevore found that horseweed control was on par with 8 ozs/acre dicamba and better than 16 or 24 ozs/acre of 2,4-D.  Horseweed control with the standard Elevore rate of 1 oz/acre was similar to 32 ozs of 2,4-D.

What was most notable from this study was that we had some ryegrass present that allowed us to assess if Elevore would antagonize glyphosate on that grass. We noted no reduction in ryegrass control from treatments of glyphosate mixed with Elevore but did with glyphosate tankmixtures with either dicamba or 2,4-D.  This is just one data set which is always dangerous to draw major conclusions from.  As such, Corteva sent me a larger data set comparing glyphosate and clethodim with and without Elevore on glyphosate-resistant ryegrass.  This research was conducted near Greenville, MS in 2017 which by most measures would have the most intense glyphosate-resistant ryegrass populations this side of Australia.  The three studies conducted near Greenville also showed that Elevore did not negatively impact glyphosate or clethodim control of ryegrass (Figure 1.).

These data would suggest that Elevore should very ably replace dicamba in the early burndown without imposing appreciable loss of ryegrass control from glyphosate and/or clethodim.  What about the summer annual grasses?  We have no data to give a solid answer to this question but plan to conduct research this spring focused on this.  Please keep in mind the plant back to soybean, corn and grain sorghum with Elevore is 14 days and cotton is 30 days.

We have more extensive burndown research with Verdict.  However, most of it was focused on horseweed.  The study or two that did contain ryegrass would suggest that Verdict does not antagonize glyphosate control. Similar to Elevore we have no data on potential glyphosate antagonizem on summer annual grass control with Verdict. Please keep in mind the plant back to cotton after a Verdict application is 6 months.  However, there is no waiting period to plant corn, grain sorghum or soybean after a 5 oz/A Verdict application.

In short, our research suggests the two best options to tankmix with glyphosate + clethodim burndown would be Elevore and Verdict.  In limited research neither looked to significantly hinder glyphosate ryegrass control.  Please keep in mind some plant back crop limitations after those herbicides are used. 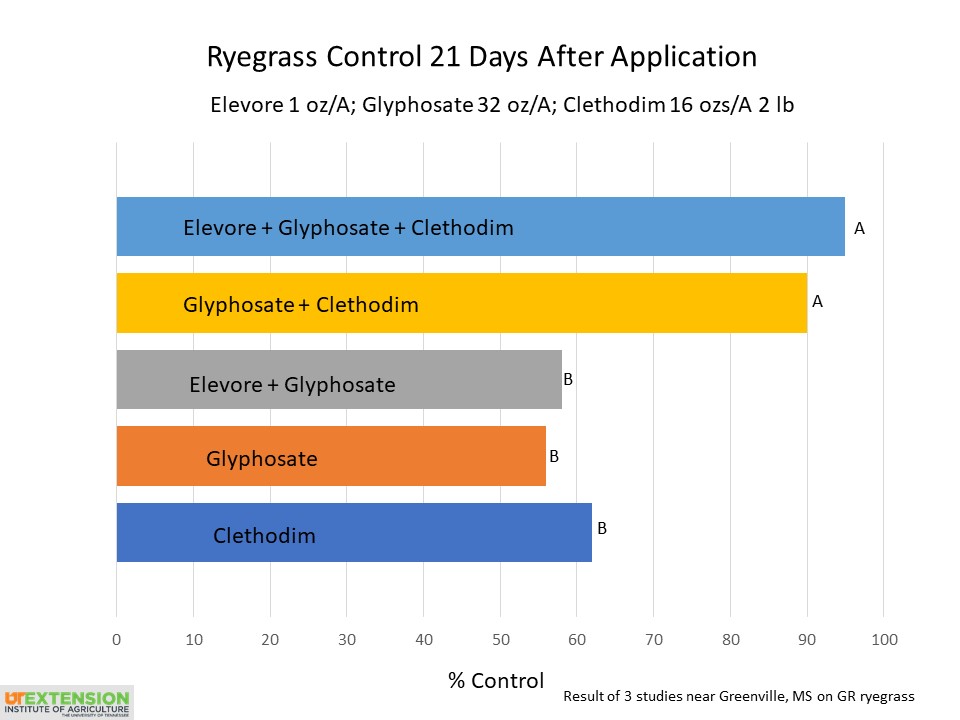