During 2020, UT Extension helped coordinate the second annual ‘Top Bean’ state soybean yield contest. This contest was sponsored by the TN Soybean checkoff, and was open to any producer in Tennessee, or growers who farm in the state. District winners for Dryland and Irrigated production in each of the five contest districts, and the winning variety planted are shared in the tables below (note there was a correction to Josh Watson variety from original posting; click on the table to open a larger version). Sadly, one of our district winners, Mr. Larry Fowler, passed away within a few weeks of harvest, and we would like to recognize his participation to his friends and family.  Contest winners will also be recognized in a few weeks during the virtual Tennessee Soybean and Grain Conference on February 4th.

2020 was a challenging year with hurricane events, and a rainy October in many locations, but producers continued to turn in some very strong yields.  Our Top Bean Irrigated winner is Mr. Justin Woodall (Grundy county) with a whopping 102.59 bushels with Agrigold G5288RX, and our Top Bean Dryland winner is Mr. Josh Watson (Loudon county) at 92.54 bushels with Becks 4667XR.  Congratulations to county agents Creig Kimbro and John Goddard who each received an agent award for having a state winning producer in Irrigated or Dryland production, and to Jeff Lannom who received county agent awards for turning in the first completed contest entry of the season, and the most contest entries.  Wishing all a happy and healthy New Year. 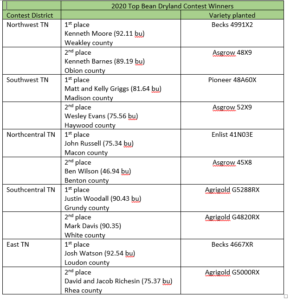