Over the years and several times in the last month, I’ve had folks tell me how bad Dectes stem borer hurt their soybean yields. Almost without exception, they describe low yielding spots in their fields and/or weak, dying, and dead plants … and they found a lot of Dectes larvae in the stems. They are convinced the two are related and look at me like I’m crazy when I suggest they are not. Here’s what I know. Don’t forget to look at the photos included at the bottom of this article!

What do we know about the biology and pest status of the Dectes stem borer?

What should I do about Dectes stem borer?

I’ve never seen a Dectes stem borer kill a plant. If your plants are turning brown or withering, there’s a good chance you are dealing with a pathogen like stem canker, anthracnose, charcoal rot, or taproot decline. I’ve walked many heavily infested fields where the grower points out how many Dectes there are in the ‘bad spot’ only to show them they were just as numerous in the good spots.

To reinforce my comments above, I wanted to share some data collected sometime ago in Tennessee, Arkansas, and and couple of other locations.  My colleagues, including Dr. Gus Lorenz, and I were testing an insecticide seed treatment (fipronil). This insecticide is not and will not be labeled for use in soybean, but it does a good job at killing the larvae before they do significant tunneling in the stems. As you will see in the table below, we had high average infestation levels of Dectes across many trials. The seed treatment provided good control, but yields were not consistently improved by this seed treatment. We might have seen a yield response if significant lodging occurred in these trials, but it did not. The take home is that stem tunneling had no obvious effect on yield. It’s apparent that the pith of that soybean stem is essentially dead tissue, so feeding by the larvae is not hurting the plant. 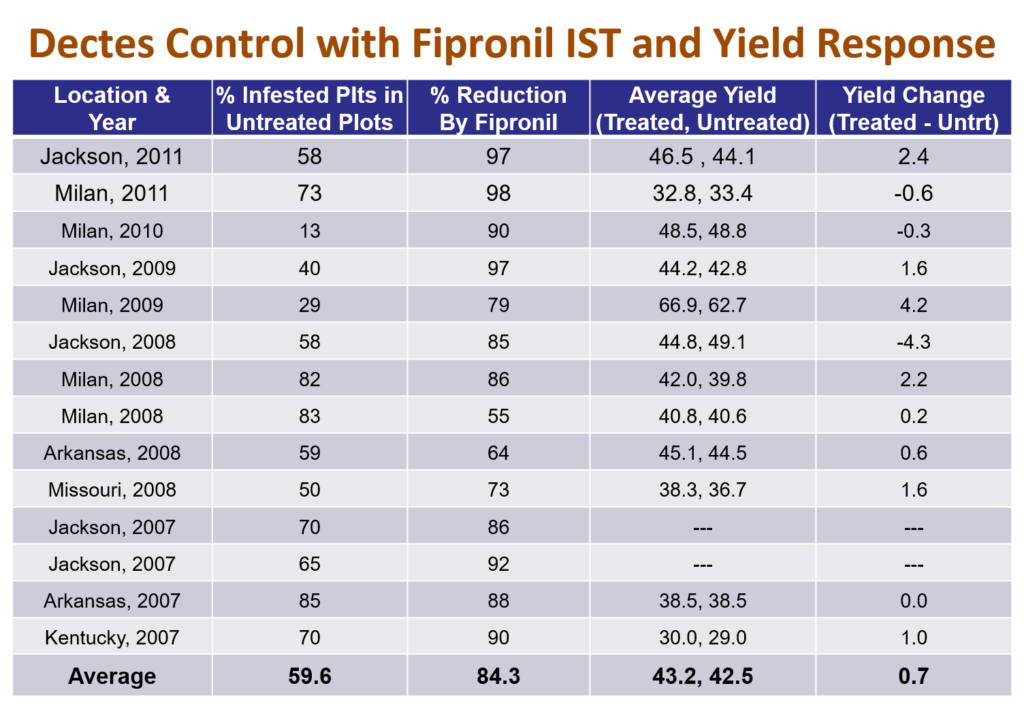