As May planted soybeans are approaching full seed, I have received several calls about terminating irrigation. Since this has been a hotter year than the past few years, there is some concern that if water is shut off too early, we may give up some yield.  Fields should be scouted to determine how far the crop has progressed.  Get a best estimate of the percentage of pods in the crop that are at full seed.  At full seed or R6, pods contain large seeds that are touching and completely fill the pod cavity (see photo). 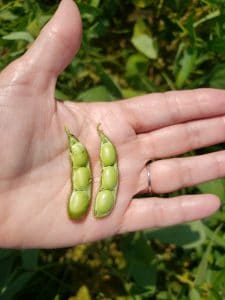 If you hold these pods up to the sky, there is no space between the seeds.  A soybean plant quits sending nutrients into seed after R6 pod stage since seed have reached full size.  Watering past early full seed may help increase seed weight in a dry year where soil moisture levels were not maintained during the season, but generally we need to think about terminating irrigation once a majority of pods have passed this stage.

UT recommends shutting off irrigation by the mid R6 stage and letting available soil moisture finish off the crop. R6 or full seed is defined as when at least one pod with full seed can be found on at least one of the top four nodes of over 50% of the plants in the field. The earliest produced pods will reach R6 first and there is some lag time as the remainder catch up.  Mid R6 means we have waited until at least half the pods on over half the plants in the field are slightly past the full seed stage.  Seed will begin to shrink down and pod color will begin to change from green to pale green or pale yellow, and if you split open pods, you will find that the seed will separate fairly easily from the pod wall, even when the pod may still be green in color.

Link to “The Basics of Soybean Irrigation in Tennessee”: https://extension.tennessee.edu/publications/Documents/W809-B.pdf