Over the past 10-14 days, our cotton crop has really taken-off.  Rains and warmer temperatures have promoted rapid growth over the past week and Plant Growth Regulator (PGR) applications will begin within the week on much of our crop.  Now that the root zone has expanded and N uptake has begun to increase exponentially, expect very rapid plant growth in areas which have adequate moisture.  Several points should be considered when attempting to regulate growth in 2017.

New varieties have again taken large chunks of our 2017 acreage.  Limited information on response to PGR applications is available for several new varieties, so I would encourage you to again base PGR timing and rate off of plant measurements (see section gauging current growth).  The table below represents our best guess as to how varieties will respond.  Classification is based on determinacy (more determinate varieties are typically more responsive and indeterminate varieties are commonly less responsive), growth habit (more vigorous varieties will require more and are therefore considered less responsive) and direct response to the regulator (variety sensitivity is largely influenced by the aforementioned factors, but specific response can vary independently based on plant response to the regulator).

The best approach to managing growth in a new variety is to use multiple, low-rate applications based on plant growth measurements. Several different measurements can be used (and multiple should be considered) but the most emphasis should be placed on current growth.  One of the best ways to gauge current growth is to measure the internode length between the fourth and fifth nodes.

If the distance between fourth and fifth node is: 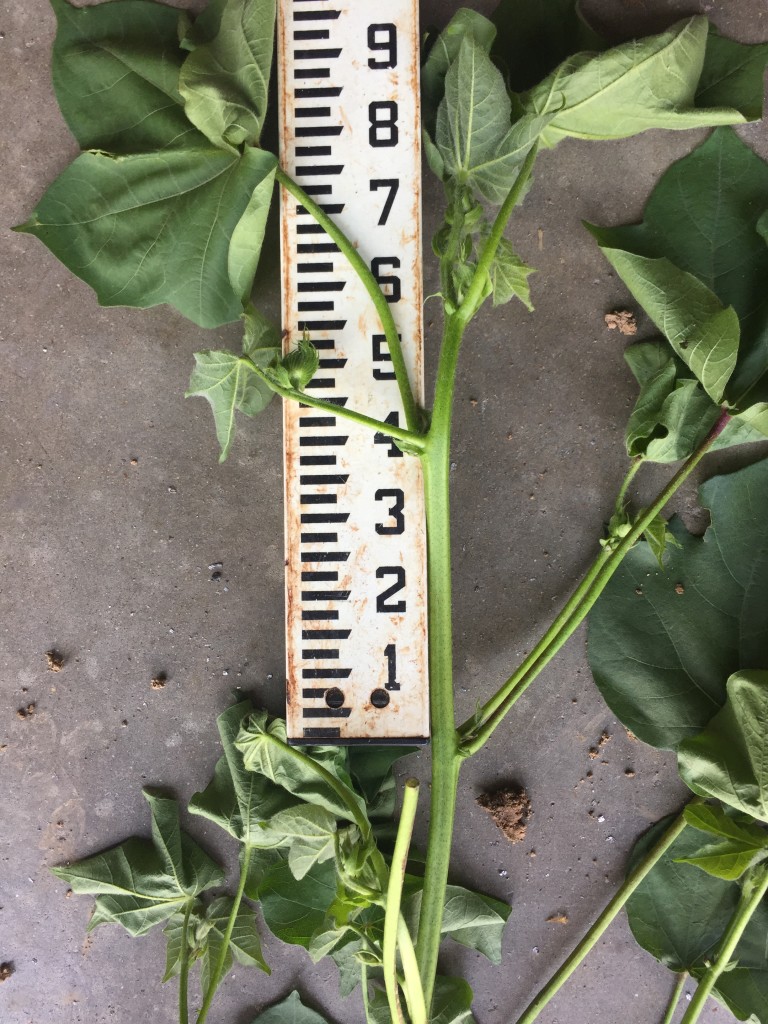 Monitoring the internode length between the fourth and fifth nodes can give insight into current growing conditions. The pictured plant has an internode length of 3+” and justifies a PGR application.

The most common application strategy for a 4.2% mepiquat chloride product is to apply (AS NEEDED):

PGR Use and Target Spot

For those who struggled with Target Spot last year, I would encourage you to consider an aggressive plant growth management strategy.  Observations from the 2015 and 2016 seasons have suggested canopy humidity may be one of the driving factors for the disease.  Cotton Specialists and several Pathologists within the MidSouth are investigating these relationships through field research during the 2017 season.  Still, I believe there is enough circumstantial evidence present to suggest properly applying nitrogen, planting to achieve populations of 35,000-45,000 plants per acre, and aggressively managing plant growth can reduce humidity levels within the canopy and therefore MAY eliminate the need for a foliar fungicide application to manage Target Spot in the Upper MidSouth.

PGRs do not shrink the plant; instead, they ultimately reduce internode elongation (among other things). Although yield increases due to PGR applications are not consistent, PGRs consistently increase the penetration of insecticides into the canopy and increase harvest efficiency.

If applied during a stress (particularly drought stress) or immediately prior to the onset of stress, yields can be negatively affected.

Do not use more than a total of 48 fl. oz. of 4.2% mepiquat chloride per acre in a growing season- that is the maximum allowed by the label.