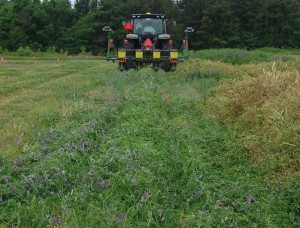 There have been a lot of questions this spring about planting into green cover crops. We have conducted a fair amount of research on this at Jackson and through trial and error we have found that planting into a green cover crop can be done effectively. Controlling and properly managing the cover crop are the most important things to consider when planting in a green cover (termination 0-7 days prior to planting). Less than complete control of your cover can cause stunting or stand loss of cash crop.

One important thing to consider, especially when you are dealing with a single species cereal cover, is whether or not you have to ability to roll the cover down. Rolling allows the cover to be much more manageable with respect to planting, however, it is not effective until the cover has reached dough stage. We have also found in a cereal cover crop that is just beginning heading, but not to the dough stages (Feekes 10-11), a roller crimper + glyphosate can be an effective option for termination and still allow the benefits of rolling. As a general rule in Tennessee, that dough stage in cereal covers does not occur until late April to early May. Unfortunately, that timing is too late to plant corn and can be late for cotton. Typically, with those crops earlier planting dates are preferred for maximum yield potential which mandates earlier termination timing of the cover crop.  At those pre dough stage cereal cover crop termination timings a herbicide is needed when using a roller/crimper for cover crop termination.

As opposed to cereal cover crops, legume cover crop like hairy vetch we have not been able to effectively use a roller crimper for termination.  With those cover crops we have had better success with herbicide termination.

In our research, we predominately examined cereal rye, wheat, hairy vetch, and crimson clover, and the results below are based on studies utilizing these covers for weed control. In general glyphosate will control cereal covers and paraquat, 2,4-D, or dicamba are more effective on the legumes. Herbicide options for terminating/managing a green planted cover crop vary by crop as follows:

Corn: We have research indicating that a legume cover or a legume + cereal cover will provide similar to slightly improved early season corn growth and development in standard no-till practices even when termination is delayed until planting. Delaying termination of a grass species only cover this close to corn planting can have negative impacts. The most consistent results for terminating these covers with a herbicide have come from herbicide mixtures. Some of the better mixtures we have examined for corn are Roundup + dicamba or Gramoxone + atrazine. If you dealing with an especially large cover a two-stage burndown of Roundup + dicamba 7-10 d prior to planting fb Gramoxone at planting would be another good option to consider.

Soybeans: Soybeans are somewhat more forgiving than corn with respect to delaying cover crop termination until at or near planting. Termination of grass or legume cover species can be delayed all the way until planting without negatively impacting soybean growth or yields. Generally, when we are planting soybeans in TN, our cover crops have begun reaching reproductive stages and become a little easier to control. When dealing with a large, legume + cereal mix, do not underestimate the value of the planter as a termination tool, especially when row spacing is <30in. Good herbicide options around planting (+/- 7 days) include Roundup or Gramoxone, but more consistent results have been obtained from Gramoxone + metribuzin. Applications containing Gramoxone should be done after the cover crop has been planted into.

Cotton: Cotton is a little more sensitive to cover crop termination than soybeans. Legume cover crops like hairy vetch can be terminated at or immediately prior to planting and if rolling/crimping is an option, terminating a cereal cover can also be delayed until right at planting. One of the best options for terminating a legume cover in cotton is Gramoxone + Caparol and/or Cotoran immediately after planting.