In Tennessee, corn harvest is beginning and soybeans will be right around the corner. Time to start talking about cover crops, in particular, what options are best for your cropping system. Cover crops offer many benefits to cash crop systems, including weed suppression, nutrient credits, improved soil health, pollinator habitat, and more. Many species can be used as cover crops but each differs in the ecological benefits it can provide to a system as well as in its adaptation to production regions in Tennessee.  This adaption is highly dependent on management practices, especially time of planting. A species selected as a top performer when planted after corn may not do so well in a system following soybeans, where cover crop planting is two to four weeks later. Planting a poorly adapted species reduces your return on investment in a cover cropping system, so let’s talk about what works in Tennessee.

Cereals have higher Carbon/Nitrogen (C/N) ratios compared to legumes. Because of this, they decompose more slowly and generally provide greater weed suppression in the succeeding cash crop. However, that high C/N ratio does have a downside in that it can tie up plant available nitrogen as microbes work to decompose residue. Commonly used cereal cover crop species include: cereal rye, wheat.

Legumes fix atmospheric nitrogen, meaning they can provide a nitrogen credit at termination. Depending on termination timing, they can also provide an excellent nutrient source for foraging pollinators. Because they have a lower C/N ratio, legumes will decompose more quickly than cereals resulting in a shorter period of effective weed suppression. Legumes are also generally less cold hardy than cereals, meaning they may not provide as much cover in the fall and winter, although many will make up for this with rapid biomass accumulation in the spring. Commonly used legume cover crop species include: crimson clover, hairy vetch, Austrian winter pea.

Brassicas, such as forage radish and turnip, have a unique tap root that can help break up soil compaction. Brassicas can also be allelopathic, meaning the roots exude chemicals that can prevent weed germination and/or reduce soil dwelling pathogen populations. Generally, this genus will winter kill and only provides significant cover in the fall. Commonly used brassica cover crop species include: forage radish, turnip.

Including a mix of species from within each of these three groups can be a good way to maximize the number of benefits achieved from a cover crop system. Within these three groups, however, there are many species, and not all of them are equally adapted to Tennessee or to corn and soybean rotation systems.

Over the past two years, we have looked at seventeen cover crop species for adaptation to two common rotation systems at three Tennessee locations. Locations included University of Tennessee Research and Education Centers at Spring Hill, Knoxville, and Milan. Rotations included corn/soy, which allows for an early cover crop planting (~mid-Sept) and later termination (early May) and soy/corn, which requires a later cover crop planting (~mid-Oct.) and earlier termination (mid-Apr.). Planting dates for each year and location are given in Table 1. Species from within each of the major functional groups were evaluated, including three brassicas, nine legumes, five cereals, and a no cover control. Each species was evaluated for how well it provided ground cover throughout the cover crop growing season, how much biomass it produced at termination, impact on soil health, and impact on cash crop yield and quality. 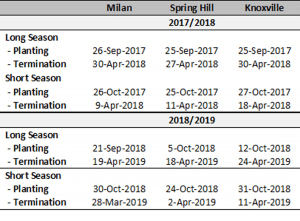 Better ground cover with a cover crop throughout the growing season can help prevent erosion and retain nutrients in the system, while biomass at termination is important for weed suppression, soil building and nutrient credits/deficits. Not surprisingly, cover crops planted earlier provided better ground cover throughout the cover crop growing season and more biomass at termination (Figure 1). Species that did best differed between these two different rotation systems.

Under a long growing season, all of the cereal species (wheat, triticale, oat, cereal rye, barley) were top performers for percent ground cover throughout the long cover crop growing season, averaging between 38 – 55% cover (Figure 2). While all provided good coverage, cereal rye, oat, triticale, and wheat also stood out as top performers for total biomass at termination (Figure 2). Because of their similar performance, going with the most cost effective or available cereal species may be the best option.

Among the legumes, winter pea, woolypod vetch, and crimson clover provided equivalent cover to all of the cereal species in the fall and winter and really took off in the spring, surpassing the cereals with percent cover ratings of greater than 85% at termination (Figure 2). However, not all legumes did well. Sunn hemp, berseem clover, and arrowleaf clover were particularly poor performers. For Sunn hemp, this was not surprising as this subtropical legume is a more typical winter cover in sunny Florida or as a summer cover in more temperate regions. However, berseem clover and arrowleaf clover are commonly used in Tennessee. Common vetch, hairy vetch, and red clover had good cover at certain points within the growing season, but not throughout the season, making them better suited to mixes that would complement their specific growing season. Crimson clover, hairy vetch, woolypod vetch, and winter pea were also all top performers for total biomass at termination, making them all around good legume options (Figure 2).

Forage radish was the only brassica that provided significant cover and then only in the fall (Figure 2). While canola had better total biomass than the no-cover control, none of the brassicas were top performers in this area (Figure 2). Brassicas can be good to include in mixes, particularly in areas where compaction is an issue due to their unique root structure, but do not count on them as a monoculture as they tend to be on the lower end of cover and biomass. 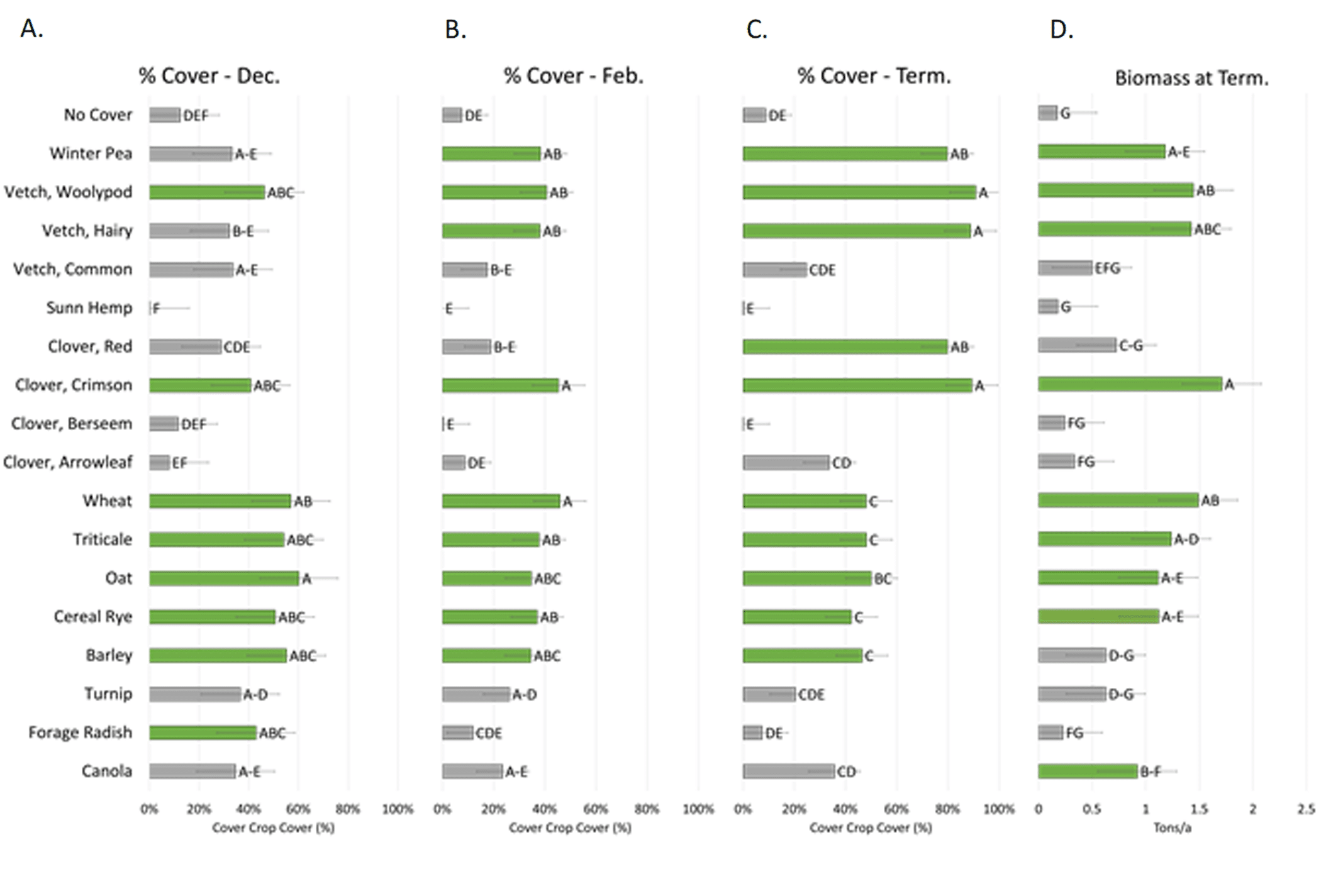 Percent ground cover and total biomass at termination were lower under a shorter growing season for all species, but the biggest differences were observed in the legumes and brassicas. In terms of ground cover, none of the brassicas did well when planted later, although the few canola and turnip plants that survived the winter did well enough to provide biomass greater than the no-cover control at termination (Figure 3). While the legumes made gains in percent cover by termination, only crimson clover provided a significant amount of biomass at termination (Figure 3). For this reason, including a cereal in your mix after soybeans is critical for obtaining benefits of reduced erosion and nutrient scavenging during the fall and winter months. Diverse mixtures can help maximize benefits, so even though the brassicas and legumes probably will not do as well in the fall and winter with a late planting, including a few of the best adapted species (crimson clover and hairy vetch, canola and turnip) may help maximize spring benefits such as pollinator habitat and nutrient credits.

We are in the process of analyzing our second year of soil health and cash crop yield and quality data, so stay tuned for more information on how cover crop species selection can impact nutrient management and, in turn, your succeeding cash crops. While a species level look is necessary to get a broad picture of what is going to do well in Tennessee, just like in our cash crops, there are variety differences within those species. This fall we are putting in a cover crop variety trial that includes 63 cover crop varieties. Year one results will be published next summer, but plan on attending the Climate Change Adaptation field days in Milan and Spring Hill next March if you want to take a look for yourself.

Acknowledgement: This research was sponsored by the United Soybean Board and Tennessee Soybean Promotion Board and performed in collaboration with the University of Tennessee Research and Education Centers at Knoxville, Spring Hill, and Milan.