Corn: Since the beginning of the year, the September futures contract has increased by $0.40. An interesting fact is that of this increase, $0.21 has occurred over the last two weeks. The below chart reflects the recent run-up in corn futures: 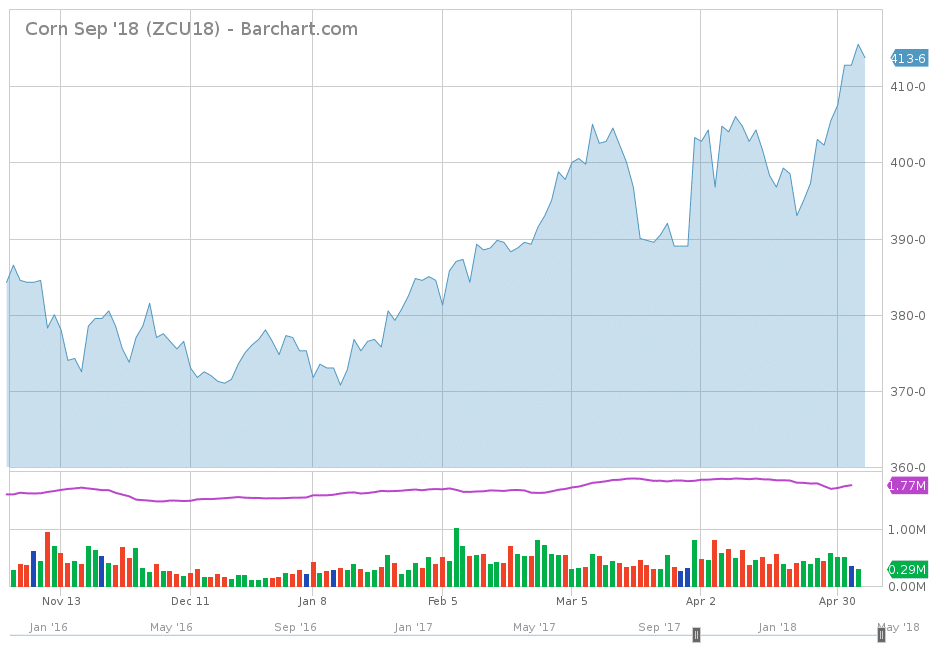 Looking at the above the chart, obviously, something is driving the market. This begs the question as to what is causing the uptick in prices. Most of the nation’s corn crop is planted in April and by mid-May. That is a given to all involved in agricultural production. There is some talk of planting delays due to the wet spring. However, that will have no bearing on yield forecasts, at least for the moment. The USDA does use a weather model to predict corn yields. One of the three factors that it uses is planting progress by mid-May, June crop stress, and July rainfall and temperatures. That being said, the delay of planted acres could impact the overall size of the U.S. crop. Other factors at play include global trade talks and weather in South America. China and the U.S. are currently in trade negotiations, which sent the futures market higher on Thursday. Also, some trade analysts are reporting that there are dry growing conditions in South America. It is still too early to draw any definitive conclusions as to the impact on the Brazil corn crop.

So, what should West Tennessee farmers do? With most of the hill corn acres planted and the bottoms soon to follow, I would envision that producers will have concrete figures of total acres by now. Farmers should evaluate their percentages sold and review selling opportunities while considering their corn emergence. For producers with very little corn sold, this rally may be a good opportunity to lock in a few bushels. The basis for new crop corn averaged -$0.11 as of today’s market close. 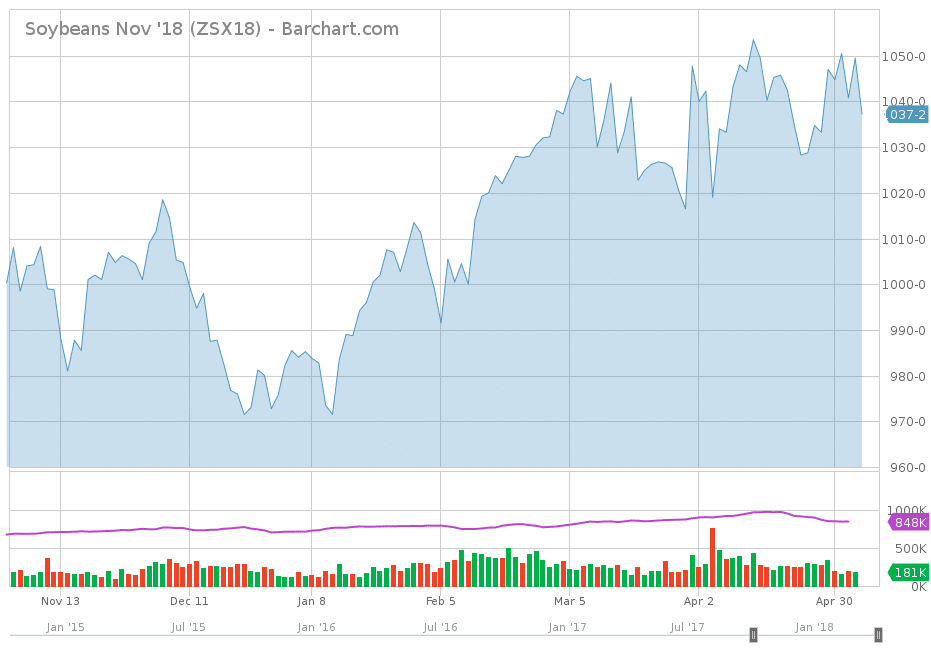 The above chart illustrates the roller coaster of a ride that soybeans have taken so far in 2018. One thing to keep in mind is that we have yet to enter into a weather market for soybeans. Planting delays have not yet become an issue since farmers are still focused on corn. Here in the Southeast, that focus will also include cotton. The volatility in the soybean market has been attributed to trade talks between the United States and China. Recent headlines state that negotiations appear to be going well with relations being on the mend. However, we have seen in recent trade days that the direction of prices can swiftly shift. An interesting fact to keep in mind is that export commitments to China are down this year. This is one reason that the USDA’s forecasts for total soybean exports have declined. This was partially masked by the drought Argentina experience this past growing season. The decline in exports to China was hidden by the uptick in soybean sales we gained at the expense of Argentina.

West Tennessee producers with uncontracted bushels will definitely benefit from the rally in soybeans we have experienced to date. Producers that are watching their costs should be able to turn a profit at $10.00, assuming average yields. Currently, producers can sell their soybeans at levels well above $10.00. Farmers should monitor their cost of production and see if the recent rally has presented some selling opportunities. I would venture to guess that answer is indeed a “yes”, assuming an average yield north of 40 BPA. New crop basis for soybeans averaged -$0.16 as of today’s market close.

Wheat: July wheat futures have been just as volatile as soybeans over the past few weeks. The below chart shows just how much movement has occurred in the July futures contract. 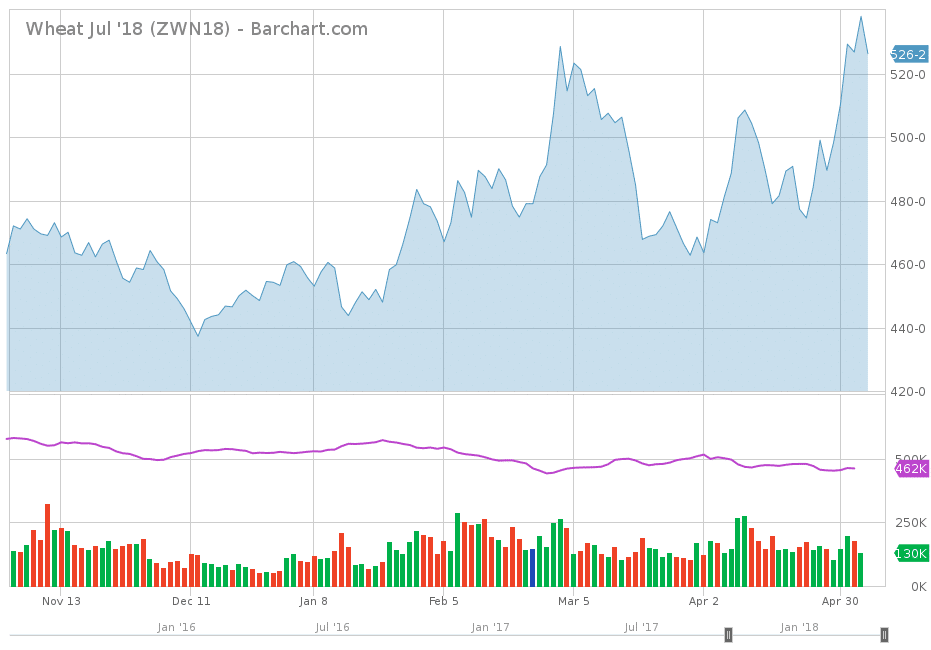 The daunting task that wheat has to face is the sheer amount of wheat out there in global storage. However, the recent uptick in prices has defied that fact. The driving force behind wheat prices is the drought-stressed Southern Plains. The following map shows the areas of the United States that are dry and the wheat is in poor condition. 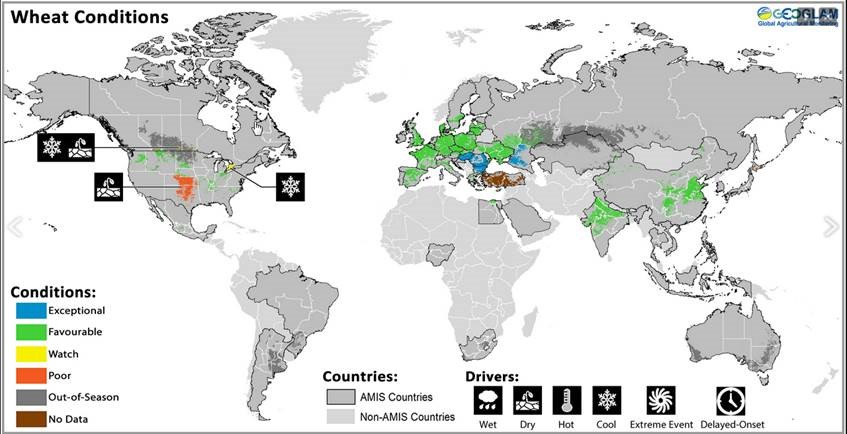 The latest drought monitor map, as of May 1, 2018, shows the same results. The key wheat growing regions of the United States are hurting, while our wheat crop here looks rather positive. West Tennessee producers have quite a bit of their crops unsold due to recent price levels and our severe winter weather. Overall, the wheat crop looks like it will be on par with past years’ yields. The recent uptick in prices above $5.15 will entice some farmers to sell unpriced bushels. When considering soybeans above $10.00 and wheat above $5.00, farmers could potentially lock in a profit on their double-cropped acres. Of course, each producer’s cost structure will vary as well as their profitability.

Cotton:  December cotton futures closed today at 80.57. This is the first time that the December contract has broken through the 80.00 price level all year. 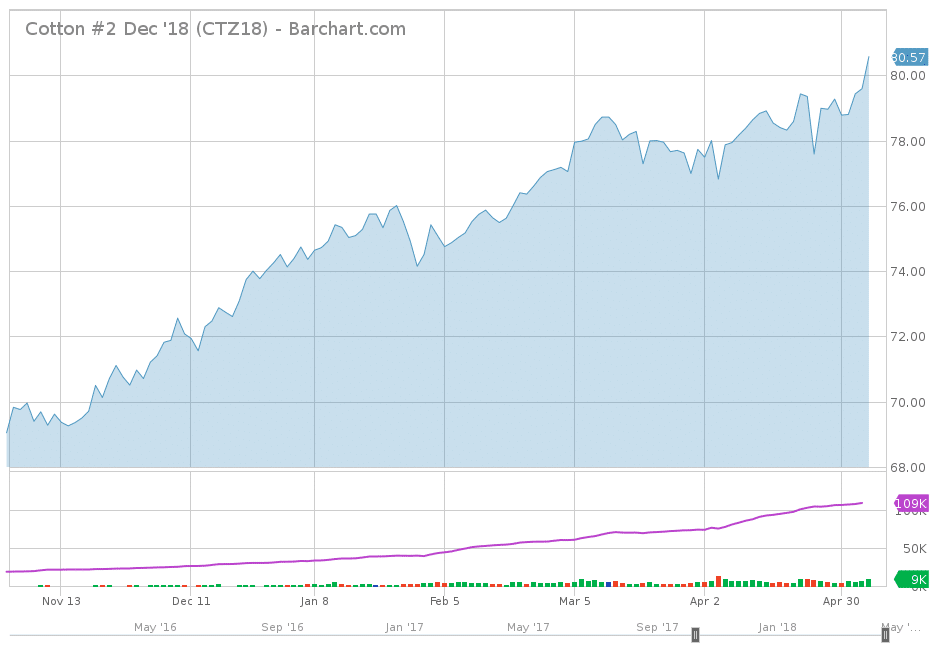 This may result in the equities softening a bit in the short-term. However, strong exports and lack of rainfall in parts of Texas are pushing the market higher. In West Tennessee, cotton equities are ranging between $0.22 and $0.23 per pound. Equities continue to remain above $0.20, which is a positive for producers. Producers that intend to plant a lot of cotton in 2018 need to continue to monitor equities and evaluate selling opportunities.

Take Home Message: The recent rally in all commodities presents a lot of selling opportunities for producers. Farmers that know their cost of production can within consider making sales within their risk tolerance. If you need assistance in evaluating your production costs to identify profitable price levels, contact your local Area Farm Management Specialist for assistance. You can learn more about the Farm Manage program by emailing me directly at danhmorr@utk.edu or asking your local UT Extension agent.